We should abolish the two-party system (Opinion) 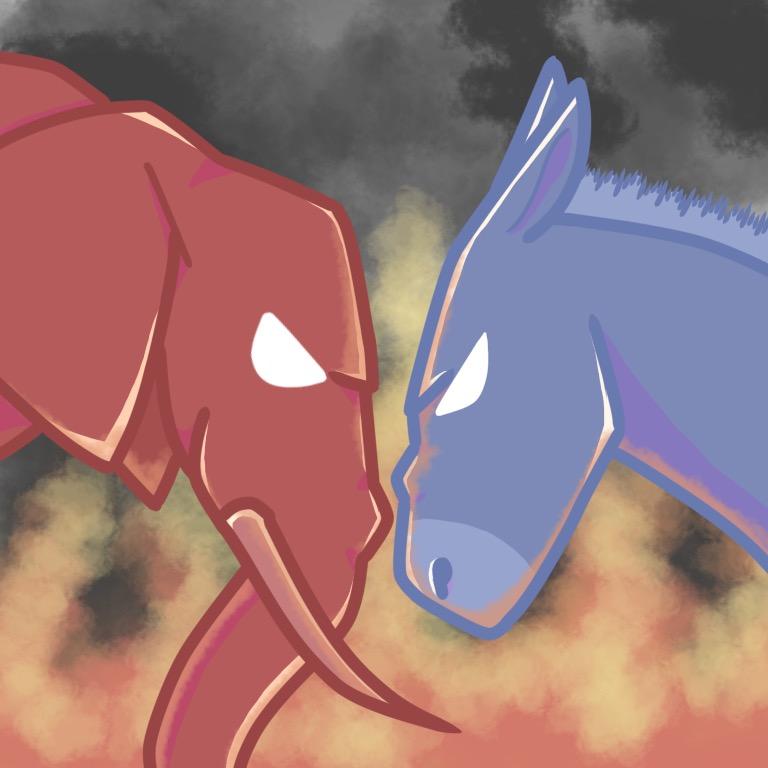 Instead of complying to the Two Party System, Americans need to keep their options open and their votes educated. Original art from featured image uniquely made for The Mav.

The 2020 election has passed, but as conversations and news coverage show, political disagreement over the election has not. Elections carry with them high energy and stress for many.

When an election comes around, the American people choose who their leaders are going to be. This can be difficult for voters because they have to research what candidates believe before they make their decision on who they’re voting for. Primaries narrow down the candidates of each party.

Most young people that don’t spend too much time researching political parties only know the Republican Party and the Democratic Party. They likely don’t understand that the other parties are often overshadowed by Democrats and Republicans. Because of this, the last few elections have basically been a choice of the “lesser of two evils”.

I believe that the primaries are genuinely of no use at this point. We need to broaden our horizons. Why must we choose between corrupt Democratic politicians and Republican outsiders who make the country more divided? Why can’t we research others? Why can’t we look into candidates that would help our country by offering new solutions?

Most Republican and Democratic candidates aren’t bipartisan whatsoever. From what we’ve witnessed so far (particularly during the 2020 election cycle), all these parties do is banter and fight with one another.

The previous election in 2016 wasn’t much better. Americans were forced to choose been Democrats and Republicans yet again — one of the most unethical politicians of all time vs. a rich, sexist, and even xenophobic billionaire.

We need politicians that do their jobs and make change happen. Though I don’t doubt we can find such politicians somewhere in these two main parties, we have seen nothing of promise for too many elections. These two parties have been doing a lot of harm and causing political chaos for years.

We need more mainstream parties that advocate for important changes, and that begins with how we research during elections and how we cast our votes.

There has been minimal positive change in the United States over the last few elections. African Americans are disproportionately being murdered through police brutality, LGBTQ+ individuals are being mistreated by others and denied rights, and climate change is being ignored when it needs attention most.

New generations have only been exposed to Democrats and Republicans, and I believe we should be doing the opposite. Clearly, there is something that is not working in American politics. Why aren’t we opening up new options to new generations and breaking the cycle of the two-party system?

Additionally, with technology increasing in popularity, the media often convinces young generations that hatred between political party advocates is normal, and staying on one side of a debate without looking into other ideas is the solution. The fact is that this will not solve any of our problems. If Americans researched other parties and those parties became noticed in mainstream politics, we would be on the road to a better country.

Our political mindsets need to change. We need to stop leading our country to doom.

Voters need to thoroughly research the different parties and what they stand for. I’m not just talking about the Democrats and the Republicans. I’m talking about the Libertarian, Green, American Solidarity, Constitution, Progressive, and Socialist parties.

Then, as American citizens, we need to make a decision on what party to vote for and  the person that we want to be represented in the party’s primary — not the party itself.

I also accept that there are a few parts of the two party system that seem to be working well for people. For one, voting is easier because Americans don’t have to choose between a wide variety of parties but instead choose between two. But easier processes don’t always benefit our futures.

I know the process sounds difficult; however, that seemingly overwhelming, research-filled time could save us four, sometimes eight, years of destruction in the United States.

Each election proves that Democrats and Republicans can’t even agree within their own parties, much less have peaceful debates about their beliefs. If we didn’t have any labeled parties, then everyone could run, have a fair opportunity to debate, vote for the candidate (not the party), and then have the top two decisions in the official election.

I propose we abolish our political party mindsets and have a process that instead considers all of the candidates without attaching them to the label of “Republican”, “Democrat”, etc.

People would watch the debate(s) at home as every candidate shares their ideas.

The true self-issue within the two-party system comes from the ideology of voting for the party as opposed to the person. In England there are multiple single-issue parties (such as the UK Independence Party) under their Parlimentary System that allow citizens to vote for candidates involved in multiple parties. These smaller parties are focused on detailed issues as opposed to broadly attaching opinions on abortion or gun control to an entire party.

The reality is that every human is going to have different views on different topics. Just because someone agrees on strict gun control doesn’t mean they are also pro life and vice versa. Broad opinions often don’t correlate. Aren’t we all technically politically independent? Most, if not all, don’t agree with everything their party stands for.

With the two-party system, we’re forcing together countless different unrelated topics instead of one important stance on one important issue. So why have two dominant parties at all?

The Parliamentary System in the United Kingdom has elected legislators that choose who the Prime Minister or Chancellor is. The majority party in the legislature gets most of the say, but as stated before, there are also many single-issue parties. As seen in the UK and Canada, governments structured like this runs fairly well.

This type of voting would be very beneficial because it would open up more options to spread awareness of smaller parties, and the elected candidate would have more widespread support from their die-hard fans as well as people that put them as their second or third choice.

Our founding fathers warned us of the division and tension that comes with having political parties, and these warnings have proven to be right. John Adams once said, “There is nothing which I dread so much as a division of the republic into two great parties, each arranged under its leader, and concerting measures in opposition to each other. This, in my humble apprehension, is to be dreaded as the greatest political evil under our Constitution.”

My point is this: These two parties that we focus on are full of self-issue and have absolutely no progressives, meaning that they don’t have the people’s best interest in mind. But there are other parties that do — they just don’t get recognized. These other parties also fight significantly less.

Realistically, it’s a waste of time to fight because of political discourse. Though he is not the only example, President Donald Trump has been bashing his political opponents for four years on his Twitter account. Where does that get us? Absolutely nowhere. But we can move forward if we abolish this toxic system.

Political parties are meant to debate with one another, not have cat fights. Debates are supposed to be gatherings of policy where candidates explain to people why one policy is more efficient than the other. They aren’t supposed to be yelling contests rooted in personal attacks unrelated to politics.

This is where our two-party system has brought us.

If voters spread their attention to other smaller political parties instead of limiting themselves to just the two most popular, more parties would get more funding and a better shot at being on the debate stage. If this happened, people would come to realize that they align themselves with these parties, not the bantering children we often see running for president. If we aim to become more educated and focused on a diverse group of parties, we can get some actual positive change in America.

I do acknowledge that a positive part of the system is the fact that the few politicians with integrity and values in mainstream parties often end up in Congress, striving to make a difference. People like Congresswoman Alexandria Ocasio-Cortez and Senator Bernie Sanders are good examples of people who work towards change without directly involving themselves in the negative parts of mainstream parties. They tend to get along with other governmental progressives and focus on major topics like economic equality and Civil Rights. There are also individuals such as Representative Lauren Boebert and Representative Ken Buck who focus on constitutional rights in terms of the right to bear arms and the freedom of private businesses.

But unfortunately, despite these few individuals who have proven to actually work to make America better, the two-party system is still very detrimental, self-issued, and broken.

Due to partisanship destroying our ability to work together and other evidenced factors presented in this article, it is clear that the two-party system should be abolished.