This novel made me rethink the structure and meaning of family 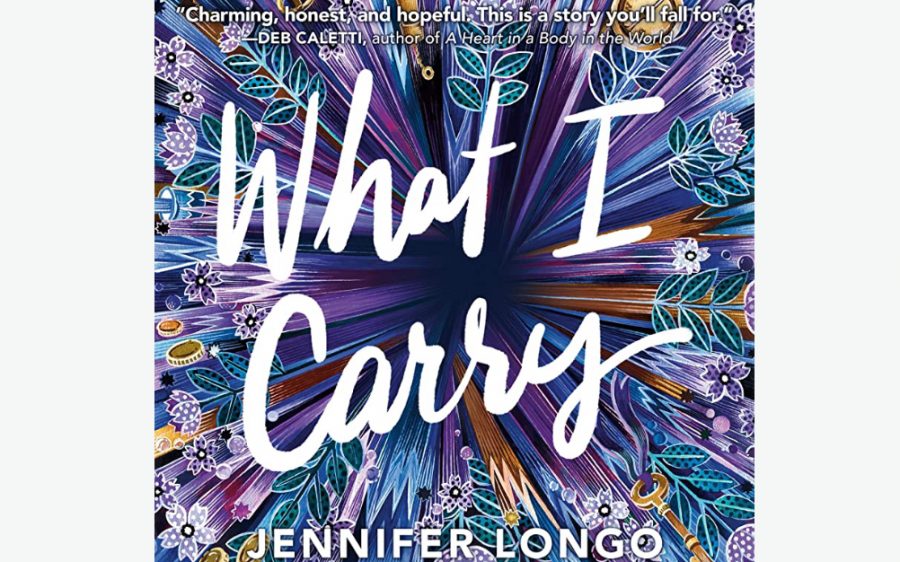 “Home is just a soft place to land in between adventures… It’s a harbor, not an anchor. Be brave, see the world, every forest and mountain, and know you always have a safe place to rest and come back to.” —Jennifer Longo, What I Carry

This article includes small spoilers from What I Carry by Jennifer Longo. Reader discretion is advised.

As much as I despise quarantine and being disconnected from those I care for, I have the pandemic to thank for some extra reading time. And it’s obvious my friends and family have quite a bit of extra reading time as well because the number of book recommendations I’ve gotten recently has been completely insane. This is where I would insert a picture of my TBR (to be read) list, but I genuinely don’t think I could capture the entire thing in just one or two shots.

But, unfortunately, semifinals exist, and studying has been taking up all that precious reading time. The only novel that I managed to squeeze in was What I Carry by Jennifer Longo. And I’m moderately glad I did. While I had some issues with secondary characters and such, the story in and of itself was engrossing enough to have me come back again.

What I Carry follows Muiriel, a senior in high school born a methamphetamine addicted infant and left by her birth mother in the John Muir California Medical Center. The nurses named her Muiriel after mountaineer, naturalist, and environmental philosopher John Muir, who the medical center she was born in was also named after. Taking after her namesake, Muiriel grows up loving the outdoors. She is put into the foster care system at an extremely young age and moves homes every several months. She’s never completed an entire school year in one house, in one town, and with one foster parent.

Connecting her love for nature with her constant moving, Muiriel realizes that no matter what her current living situation looks and feels like, she’s always at home when she’s outside. She’s under the same sky and sun no matter where she’s living. This leads little Muiriel to the habit of simply walking outside and continuing on when she feels stressed or overwhelmed with a move. Though Muiriel works to keep her foster record as perfect as possible, never begging for gas money or getting angry with the other kids, getting lost in random cities every week often leads to the foster parents asking her social worker Joellen to come pick her up and move her to another foster home.

Muiriel soon comes to the conclusion that being self-reliant is the only way to remain unadopted, unattached, and successful in aging out of the foster care system without becoming a pregnant cocaine addict behind prison bars. She’s convinced that if she never actually likes her foster parents and wants to stay with them, they can’t hurt her by sending her back to her social worker Joellen or to another foster home.

So she continues from house to house, bunk bed to bunk bed, picking up items from her different areas of stay to remember them by. That is, until her senior year of high school when she settles in with her last foster parent, Francine, before she ages out. It’s not long before Muiriel begins to grow attached — she enjoys Francine’s laid back attitude and her sweet old dog Terry Johnson, meets a friend named Kira who she becomes very close with, and spends more and more time with Sean, a boy she met while working an internship at a local educational forest camp for children.

Completely terrified of breaking her motto of seeing boys but not dating them and befriending people but not getting attached, Muiriel is often seen as cold towards the small town that welcomed her and is growing to love her. She refuses to unpack her suitcase in the room that Francine offered, overwhelmed by the lack of strewn about items from other foster kids and the mindset of unpacking — unpacking meant you were planning to stay.

Instead, she tries to age out of foster care gracefully and prove to the world that not every unadopted foster child ends up a homeless addict. But more and more, the land and people of the small island town call to her. She’s offered a job working with children at that forest camp, her dream career, and Sean and her are becoming a more-than-friends kind of close. Additionally, Muiriel has been reunited with her previous foster sibling, Zola, something she was praying would happen one day.

That’s when it happens — Francine asks to adopt her. She goes through this whole process of panic and stress over how to respond, but ends the novel by accepting the adoption offer.

Though this novel was unique and taught me a lot about a subject I wasn’t very familiar in, there were a few big things that bothered me.

On a positive note, Muiriel was an incredible character. She was interestingly guarded, but not in that cheesy way that a lot of books have where this amazing boy comes along and knocks down the walls of a shy, awkward girl. It was a story, for once, focused on friendship and family. At least at first. She was guarded for a reason, constantly worried and stressed for Zola’s and her own future. Additionally, she had some unique characteristics — she was maternal due to all the young children she’d stayed with in foster homes, and she had a story that was unlike others I’ve heard. She stood up against systemic racism in the foster system, fought to spread awareness and truth about the adoption process, and worked to educate any ignorant people she met.

My biggest issues were with some of the secondary characters. For one, Kira, her close friend, was the most awkwardly edgy character I’ve ever read about. She wore all these chains and black and was “super cool” because of her excessive tattoos and smoking addiction. Of course, none of those things are bad, it’s just the way that they described her added unnecessary “edgy sidekick friend” vibes to the novel.

Kira was also targeted by two popular, rich, snooty girls. It makes me wince just thinking about it. It was the classic mean girls scene with Kira enduring all of these horrible things from Tiana and Katrina. They paint over the mural Kira was asked to do on the art classroom wall, break her pottery, etc. It’s… not good. Or interesting. At all. The lack of individuality within these two characters and the things they do really ruined the novel for me. It was just so predictable and basic, which was unfortunate because I didn’t think the novel was that bad before they introduced these two.

As for Sean, he was quite literally a muscular, confident, blond guy that Muiriel always described as “perfect” and “heart melting”. It was a little too much in my opinion. And it was frustrating to see such a unique character like Muiriel start thinking and talking like the classically lovesick teenager that’s in countless novels. I felt like Sean would have been alright if he had any personality, but it was nonexistent. His only personality traits included his ability to hike and his muscular arms. So pretty much nothing. And I’m not going to claim that looks don’t matter at all in characters and that personality is the only thing I care about, because that’s never true for anyone. But the lack of individuality and personal thinking disappointed me. Big time.

It seemed that this story was interesting, different, and unique until Sean, Katrina, and Tiana came along, which was really unfortunate.

Francine was probably my favorite character. She was a no-nonsense, sweet older lady with an adorable dog. Francine had a way with words, and some of the quotes from her are just so incredible and insightful. She taught Muiriel lessons about family and opportunity and caring for people. There’s truly nothing negative to say about Francine.

Some of the smaller characters, such as Zola from Muiriel’s previous foster home and Natan from the educational forest camp, were actually very well done. They brought life and color into what was turning out to be a pretty bland storyline. And that’s probably what confused me the most if I’m being honest. Why were the main characters the least enjoyable to read about and the minor characters the most enjoyable to read about? There was so much energy put into characters with no personalities and no original thoughts.

The writing itself was pretty good, especially near the beginning and end. Jennifer Longo perfectly described the relationship between Muiriel and Francine in an intriguing way. She also had a lot of ongoing writing patterns throughout the novel, one of which was opening each chapter with Muiriel describing one thing she carried in her suitcase and the story of how she obtained it.

I’d also like to mention the fact that I read this book twice and listened to it once on Audible in preparation for this review and didn’t realize the connection between the title, What I Carry, and the fact that Muiriel mentioned one thing she carried in her suitcase every chapter until the third and final read. Not sure how I missed that.

Overall, I’d probably give this novel about a two-and-a-half star rating. Definitely didn’t land on my favorite’s list or my “will read again” list, but it wasn’t an overall horrible read. It addressed issues that I didn’t even know existed, and that was refreshing. But its overall lack of originality in most characters and the resulting repeat of a bland high school love story dropped it way down my list.

If you come across this on the virtual shelf of a virtual library, I suppose you could give it a try. But don’t expect an incredible and mind blowing reading experience. Not an awful read, but definitely not a fantastic one either.