In the ashes of 2020, this book series was truly an ember

An Ember in the Ashes is the gem 2020 needed 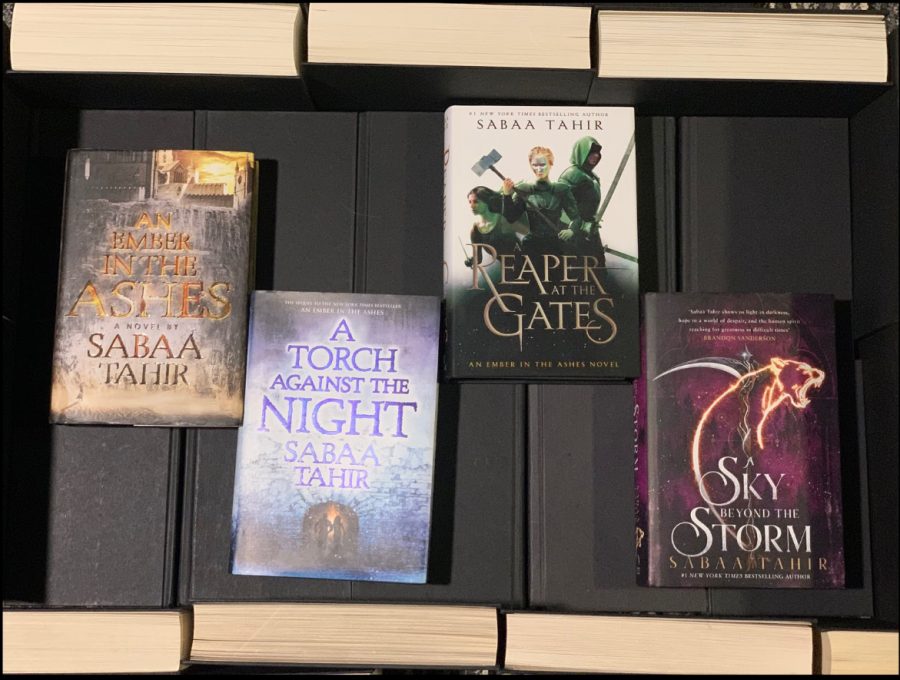 This series was an ember that tore through the ashes of 2020 and lit a torch that brightened the end of my year (sorry for the really awful puns).

“Life is made of so many moments that mean nothing. Then one day, a single moment comes along to define every second that comes after. Such moments are tests of courage, of strength.” – Sabaa Tahir, An Ember in the Ashes

An Ember in the Ashes takes place in an ancient-Rome-inspired world where Marshalls control the Empire and punish defiance with death. In the first installment of the series, we follow Laia and Elias on their respective journeys throughout the novel.

Laia is a Scholar, the lowest class in the Martial Empire that is often taken into slavery, and when her brother is arrested for treason, Laia tries to go to the Scholar Resistance fir help freeing her brother from prison. The Resistance agrees to aid Laia in freeing her brother on the condition that Laia agrees to spy on The Commandant, who runs the Empire’s greatest military academy, Blackcliff.

On the other hand, Elias is a Martial and the finest soldier at Blackcliff, but he secretly wants to be free of the tyranny that he and his fellow Masks have been trained to enforce. Elias wants to desert Blackcliff, but doing so would result in his death. Laia’s and Elias’s stories intertwine, and the two realize just how connected their destinies are.

In the second book, Helene Aquilla’s (my favorite character!) perspective joins Elias’s and Laia’s as we follow the three of them for the rest of the series. There are four main installments in the series (An Ember in the Ashes, A Torch Against the Night, A Reaper at the Gates, and A Sky Beyond the Storm) and a prequel graphic novel (A Thief Among the Trees) that trail Elias and Helene during their years as Fivers and will receive two sequels in the coming years.

The conclusion, A Sky Beyond the Storm, was just released in December 2020, and it is almost the most perfect conclusion to a series I have ever read (and I read a lot). I found this series to be amazing, I haven’t read a whole lot of novels that attempt to write in an ancient-Rome-inspired setting and actually succeed. The setting and atmosphere are very immersive, and the characters are written in a way that you come out of the book feeling as if you know them.

The characters make mistakes, and they face consequences and suffer for those mistakes, which is something that I haven’t seen a lot of authors do to their characters. Tahir knows how to make her characters suffer. No one is safe or off-limits, and that is a bold move for an author to make, which makes it even more perfect. I fell for the characters, and Tahir made me feel their pain in a way that many authors haven’t before.

As the series continues on, the books just get better and better, and there are twists and turns that will actually knock you out of your seat. Tahir went places that I wasn’t expecting for the story to go, but the twists are not unrealistic for the story. Each character grows as the story does, and you learn more and more about all the characters in the story, not just the main ones.

I binged this series in December, and am so glad I did because it has become a new favorite that I will always recommend. This series was an ember that tore through the ashes of 2020 and lit a torch that brightened the end of my year (sorry for the really awful puns).