This unique and well-written novel proves itself worth your time 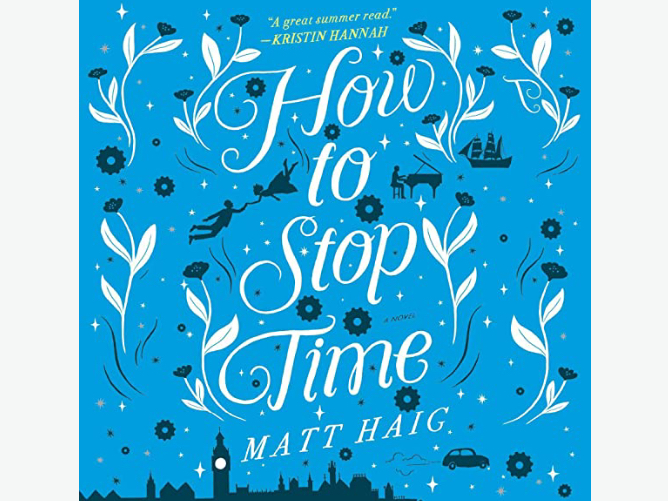 “It is strange how close the past is, even when you imagine it to be so far away. Strange how it can just jump out of a sentence and hit you.” — Matt Haig, How to Stop Time

This may be odd, but I generally don’t read books that aren’t suggested to me by a family member or friend. Browsing a library YA section and then just reading something I randomly find off the shelves is a pretty rare occurrence for me. And I think that’s because of some of the disappointing reads I’ve had in the past while using this technique. But when I came across this novel on my Overdrive (a library app I use to check out free ebooks and audiobooks) suggestion page, I took a chance and went for it.

How to Stop Time by Matt Haig is a novel that tells the story of Tom Hazard, a man with an extremely rare condition called anageria that causes him to age extremely slowly (about 15 anageria years is equivalent to one regular year) and live for centuries, completely immune to diseases and illnesses.

Tom was born in France in the year of 1581 (yes — 440 years ago), but it appears that he’s in his mid 40s to everybody else. Tom isn’t the only person with anageria either. In fact, Tom’s involved with a whole society of individuals (the “albatrosses” or “Albatross Society”) with anageria whose goal appears to be collecting all those with this rare condition into one group and keeping them safe from being discovered by the public or messing up and blowing their cover at some point.

Sounds like a helpful and innocent group, doesn’t it? Well, spoiler alert, it’s not. It’s really, really not.

While this group believes that regular human’s lives are disturbingly short and think of themselves as highly superior to others, Tom’s condition has really traumatized him. It forced him to leave his wife Rise and daughter Marion for what he believed would be forever, led to the death of his mother, and, eventually, was involved in Rose’s death.

Another man with anageria named Hendrich manages this Albatross Society. And he’s got some issues. He’s a pathological liar that conveys false information multiple times to Tom, even going as far as to find Tom’s daughter (who Tom had been searching for for centuries) and hide this discovery from him. Hendrich turns Marion against Tom, and she comes pretty close to killing him. But instead, she ends up killing Hendrich. Yeah, it was a pretty dramatic scene.

And if that wasn’t enough trauma, Tom realizes that he may be falling in love again, which is generally a very painful experience for those with anageria due to their lover’s short life span. Near the middle of the book, Tom expresses that he wants to settle down for a little while and teach history. There he meets Camille, a French teacher that immediately catches his attention. Just as they begin to grow closer, Camille blows it by mentioning a picture she’d seen of Tom, not looking much younger than he does at the moment to her, playing a piano in a bar. It was old — like, really old — and in black and white, which she’s obviously very confused about.

If I’m being completely honest, I wasn’t much of a fan of this addition. Don’t get me wrong, I’m not some cold-hearted person who hates all love stories and thinks they ruin good novels. I actually believe love stories intertwined with suspenseful and stressful plots can be interesting if written correctly. But this just… wasn’t. It was painfully forced and stiff. I genuinely think the love story was something that was thrown in at the last moment to try and cater to different audiences, like the author somehow couldn’t get people who liked romance to read the book if they didn’t have that piece in there.

I think the romance was supposed to be the main part of the novel, but it seemed like a side idea that didn’t quite fit with the story line.

The novel started off slightly confusing with little explanation of who this guy was or what exactly was going on with this whole anageria thing. I like some element of mystery, but the opening was clearly not written to build suspense or attach readers. And if it was, it didn’t really work.

But I’m the type of person that refuses to set down a book and make judgements on the entirety of the novel before I’ve completely finished reading. And that sometimes is a curse — you wouldn’t believe how bad some books can be. This specific novel wasn’t necessarily bad because I do acknowledge that the concept of the plot was actually really unique and interesting. I’d never heard of this idea before, and in the summary I read before starting the novel, the concept seemed neat. The execution of the plot was where I ran into problems.

There were just a few things here and there that kind of ruined crucial parts of the read for me. For one, when Tom talks about finding Marion, it’s super sweet and heartwarming. But when he actually meets her, it really takes a turn. It gets so cringey and cheesy, it’s truly painful to read. It’s like the book is mimicking what a “normal” father and daughter relationship looks like and should be if they’d been apart for such a long time. It’s cliche to say the least, which is unfortunate because much of the book beforehand is not nearly as predictable, and that one hiccup was a huge letdown.

It also seemed like there was too much going on at once. The book was trying to do that classic new teacher romance. (You know, when the girl always immediately falls in love with the new guy? Yeah, they did that, teacher version.) And at the same time they were doing the Albatross Society thing where Tom’s trying to take down Hendrich, and then there’s the Marion search and the trauma from his wife Rose dying long ago and his growing friendships with certain members of the Albatross Society and—

You get the picture. There’s a lot happening.

In my opinion, it’s so crammed that the reader isn’t able to focus on one specific event or goal and truly feel the depth of that event or goal. It’s just too much. Again, it felt like the author was trying to make the novel appeal to as many readers as possible.

On the more positive side, there were a few things I really enjoyed about Matt Haig’s novel. For one, the concepts of the story line seemed new, and I had never heard of anything similar to them. And again, the characters had intriguing individual development and complex thoughts. There was also a lot of attention to detail, specifically historical detail. As much as I genuinely enjoy learning about history, I’m not the greatest in classes and such, so I couldn’t truly say if all these details were 100 percent accurate or not, but I can say that as a reader, the amount of individual details involved in each era Tom lives through makes you feel like you’re right there with him. It’s authentic and refreshing.

I also enjoyed the transitions between the present day and previous eras. It was smooth, well written, clear as to what time period they were in and how it was related to Tom’s thoughts, and brought depth into an otherwise often lackluster section.

I’m not sure if I can fully say that the positives outweigh the negatives or vise versa in this book. It was pretty neutral.

The beginning was confusing and dull, the middle of the story line pulled me in with its attention to detail and new characters, and the end was probably the most disappointing section due to its lack of individuality and complex plot.

But despite its faults, How to Stop Time was a pretty interesting read if you don’t think about the minor issues too much. It’s good for relaxing or if you’re looking for something that doesn’t make you consider philosophical ideas in overwhelming depth and detail.

I’d probably recommend this book to a friend for a possible read depending on their style. But there are many other books I’d recommend before How to Stop Time by Matt Haig. It wasn’t nearly as good as I expected it to be, but it also wasn’t awful.

I’d give this novel about a three-star rating.