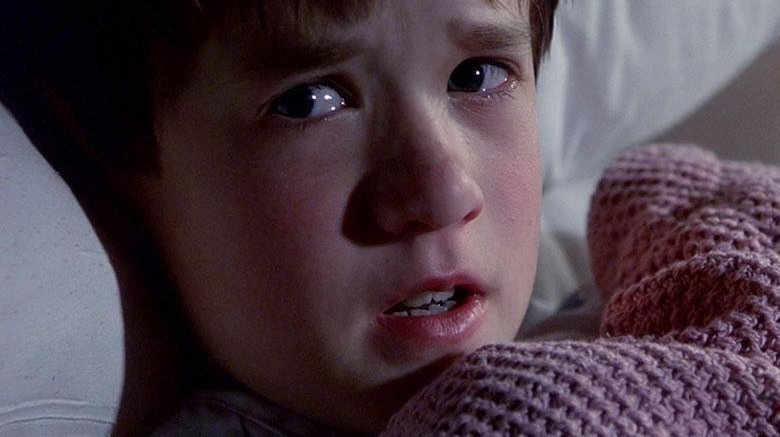 The Sixth Sense is still an amazing watch, whether during “spooky season” or not.

Many can remember the famous line, “I see dead people”. Since its release in 1999, The Sixth Sense has been a classic for the shocking and thought-provoking scary movies genre. I had the excitement of seeing this for the first time on Halloween night many months ago.

The Sixth Sense is an excellent thriller run by many twists and turns. Even the most neutral scenes may seem unusually tense. Through the fall leaves and the daily struggles of individual life, this story follows a young boy, Cole Seer, and a child psychologist, Dr. Malcom Crowe, who work to explore Cole’s “sixth sense”: his ability to see dead people. Through the movie, both characters learn how to fight through their trauma and, in some cases, find an ending to it.

The movie, which was directed by M. Night Shyamalan, is much more of a spooky psychological thriller than a horror movie. This movie is definitely a great option for those that have not ever seen true “horror movies” before. This film has truly kept me thinking. It had many great twists and shocks throughout.

The rest of this review contains a few small movie spoilers. Reader discretion is advised.

Bruce Willis, who played Dr. Malcolm Crowe, really sold the desperate child psychologist character and brought it to life for me. The movie starts out with Crowe and his wife, Anna Crowe (played by Olivia Williams), celebrating an award for Dr. Malcom’s psychologist work. They then head up stairs for bed only to be met by a shattered windowwith shards of glass scattered all along the bedroom floor, underneath the window ledge. Anna Crowe stands next to the window, her terrified expression portraying her fear of what will happen next, while her husband slowly walks toward the cracked bathroom door. There stands an insane, disturbed looking man, almost hunched in a baby-like manner with disheveled clothing hanging on his bony limbs. Malcolm Crowe stands there, completely astonished and terrified as the man wails about how Malcom “failed him”. Then it clicks. This strange man is none other than Vincent Grey, a former child patient he treated for hallucinations. Before Crowe can talk Vincent down, Vincent pulls out a gun and shoots Crowe, then he shoots himself, directly after, straight in the head.

The next fall, Dr. Crowe becomes obsessed with helping a little boy, Cole Sear, who has a case almost identical to Vincent’s. He spends so much time trying and trying again to understand Cole that he leaves his marriage hanging by a string. He and his wife barely talk anymore, and it’s tearing him apart.

Bruce Willis carries the desperation of his character directly to the big screen. The hopelessness that he has towards making things right and repaying his debt to Vincent is greatly expressed. This performance is filled with torment and despair through this troubling time in his character’s life.

My favorite part was probably when Cole Seer admits to his mom that he can see dead people. They are sitting in a car, stuck in traffic behind an accident, when he points out that someone has died in the crash. Then a lady with small streams of blood flowing down her face appears next to his window with a bike helmet on before walking away as if nothing has happened. He tells his mom about how his grandmother, her mother, wants to pass on a message of greeting and an apology for taking her bumble bee pendant. I find this slightly funny, and it resolves many conflicts between Cole and his mother.

Young Haley Joe Osment performed in an extremely convincing way. It was so impressive that viewers could easily forget that this was still acting — I know I did. It was full of emotion and young despair. His character, Cole Sear, is terrified of his sixth sense: seeing ghosts. He is tormented everyday with the constant sight of the dead walking around the world, dragging their feet, unaware of their own deaths and the modern world around them. He really brought it to life, whether through his tortured tears or his earth-shattering screams. It felt as if all these emotions were genuinely real, and it helped take the viewer on a horrifying ride right along with the actors. One of my friends who was watching the movie with me also reminded me that Osment almost received an Oscar (and many other awards) for this movie. I can see why — his acting was phenomenal.

The Sixth Sense made approximately $672.8 million within the United States, $379.3 million internationally, and $293.5 million in Domestic Box Office. About 95 percent of other films, during that time in theatres, fell below this amount. Clearly, this movie did extremely well in financial profit and social buzz, which isn’t a surprise given its incredible twists and deep meanings.

I left this movie with many questions. For one, how exactly can these ghosts see Cole? And how do they know where to look for him? Also, which one told him about “Stuttering Stanley”?

There was another universe created with this movie, filled with many questions and unknown answers. It’s too bad that some of the ghosts didn’t explain all of their stories, but really, the film was almost two hours long. The Sixth Sense is a great movie to watch anytime of the year. The time is not set in a certain season for the whole movie, and unlike many other scary movies, it isn’t strictly October-related.

Now you may be wondering, “Wait, so you said that there were multiple shocking twists and turns, where were they? This movie is a whole twist in itself. I’m not an awful, cruel person, so I will NOT be spoiling these amazing scenes! I strongly suggest that you go watch this movie for yourself. Then you’ll see these long-awaited shocks and thank me for not taking them away from you. All I can say is that you won’t be disappointed. The Sixth Sense is a very well made movie with creative twists and turns that will leave you contemplating for days to come.