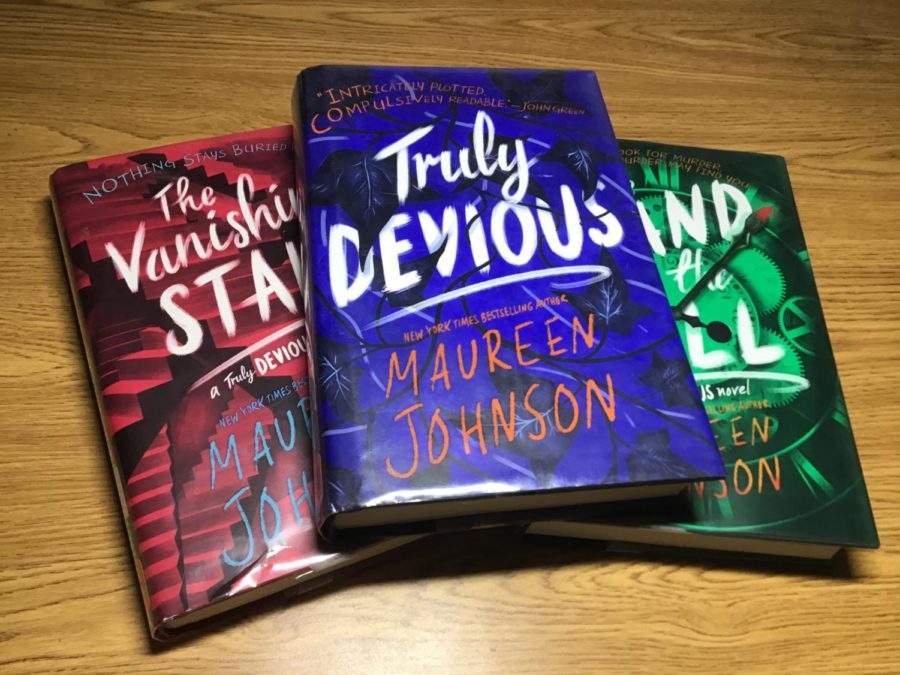 I consider myself a newbie murder mystery novel and forensic documentary enthusiast. I’ll admit it’s becoming a small obsession. Maybe a pretty substantial obsession, actually. But murder mysteries seem to be difficult for writers as it’s a challenge for them to write something that keeps the reader wondering the same questions the detective is while not being cliche, obvious, or uninteresting. I’m not a writer myself, but this specific mystery genre seems almost impossible to make top-tier.

And yet there are a few series and stand-alones that seem to absolutely nail it. This series is one of those.

The first time I finished this series, I spent every second I had (and didn’t have, cough cough, AP U.S. History homework procrastination, cough cough) either listening to the audiobook or, more often, frantically swiping from page to page, reading as fast as I could through the ebook version. My audiobook reader was not great, so I opted almost entirely for the ebook this time around.

I had no idea what would happen on the next page and continued discovering things along the way with the primary detective.

Did I cry and sob and gasp at each twist and turn? Yes. Did I throw the device containing the first, second, and third ebook at my closet door? Yes, multiple times. Did I practically wear a hole into the carpet from pacing around my room, heart beating as the characters made shocking discovery after discovery? Yes, I did that too.

I’d also like to mention that I don’t generally purchase a lot of physical, hard copy books. I read many online ebooks, and my family has a subscription to Audible. Spending money on hard copy books makes me feel — in a way — guilty. As much as I believe literature is genuinely what makes the world go ‘round (because, if we want to get deep, in my opinion, literature reveals context and commentary on societal topics that open people up to raw compassion, a growing desire for knowledge, and a better understanding of humanity), buying books stresses me out. I never buy a book before I’ve read it as an ebook or through audio multiple times and have deemed it worthy for a spot on my bookshelf.

But, guys, I bought this trilogy on hard copy. And that’s saying a lot.

Truly Devious, The Vanishing Stair, and The Hand on the Wall alternate between two main perspectives and two main mysteries. It’s the classic finding yourself knee-deep in mysteries while trying to solve a colossal, “unsolvable” mystery.

Stevie Bell is obsessed with the so-called “Ellingham case” of 1936, where a ransom note pieced together from carefully cut out newspaper letters shows up at the mansion of the wise, wealthy Albert Ellingham. The note implies a sing-song sort of cadence and utilizes playful rhymes that suggest murder to be some sort of game. As Mr. Ellingham is known for his love of games (everything from simple board games to intricate and dangerous house games with his many wealthy guests), the note appears to be poking fun at him. But Mr. Ellingham, understandably, doesn’t find this ransom letter very funny. His wife and young daughter had gone out for a drive and were still gone when the note was received. It appeared they had gone missing.

Later, Mr. Ellingham receives an untraceable call from an accented man that demands ransom money… and then more ransom money. But, as you may have guessed, his wife and daughter are still not returned even after hearty cash payments are brought to the criminals.

This case remains open-ended and becomes both the unsolved mystery of the century and an eerie point of conversation far into the future. Though many give up on actually solving the case, there are still some who look for Alice Ellingham (either dead or alive) in order to claim the Ellingham riches rumored to have been offered to any one person who finds Alice.

Jump to the 21st century, when wannabe teenager Sherlock Holmes Stevie Bell finds herself invited to Mr. Elingham’s prestigious academy, a significant historical building that still houses and teaches teenagers with unique interests. Stevie is specifically invited due to her obsession with solving the well-known Ellingham case. She has an internally-rooted dream of finding herself in a mystery, assuming it would be an exciting and interesting turn in her young detective career.

But you have to be careful what you wish for because as Stevie finds herself tangled in a web of murders and criminal activity at the Ellingham Academy, she recognizes that mysteries that put one’s safety and sanity at risk aren’t nearly as thrilling to be snared in as they are to read about and study within the safety of your own home.

While Stevie is involved with one mystery after another at the school, they grow to become overarching issues that she wasn’t prepared for and didn’t expect to have to investigate. So large, in fact, that she begins to unravel clues from the Ellingham case — the case of the century — that professional criminal detectives and investigators couldn’t make any progress from.

As Stevie solves one tangled modern case after another, she leads herself closer and closer towards solving the legendary Ellingham mystery. And yes, (SPOILER ALERT) Stevie’s ambitious investigative goal is achieved throughout the trilogy.

The three books are difficult to explain separately, which, in my opinion, is exactly how a series should be: a continuous concept, always heading in a single direction that integrates into one phenomenal story.

The pacing of these three books is absolutely perfect, though after reading a couple fellow reader’s thoughts on the trilogy on Goodreads, I do agree it could have been compacted into two books. However, in my opinion, that may have made it a little too rushed to enjoy, and for my personal reading style, a little too rushed to want to keep turning the pages all night long. Quick-paced series tend to be slightly overwhelming in my opinion, which takes the enjoyment out of reading and leaves no purpose to continue on to the next novel.

In other words, yes — the trilogy was a bit slower than I expected it to be. But for me, that pace was extremely well done and gave me just enough time to process major events before moving on.

I was invested and interested in nearly every single one of the characters. They all had their own individually crafted personalities that were unique and drew me in as a reader. Stevie’s close friends at the academy were especially enjoyable to read about, including Nate, an antisocial and constantly stressed writer that hangs out in his room doing anything but writing; Janelle, an incredibly intelligent mechanical whiz; and Larry, the academy security guard that is often fed up with Stevie’s unrelenting interest in snooping around where she doesn’t belong — but he eventually ends up giving in and helping her out every time she needs him.

The only problem I had in terms of characters was named D-A-V-I-D. David is Stevie’s unexpected and disgustingly manipulative love interest at the academy who appears to have no other talents than lying and being undeserving of his wealth. He’s a bit of a sociopath. Every time he made it back into the series, I had to keep myself from exploding with rage over a fictional being. He’s painfully manipulative and has immature temper tantrums when he doesn’t get attention — so much so that his father actually has to pay the academy to not kick him out.

But as much as I despise David, I don’t think he took away from the series too much for me. Sure, he put a small dent in my five star rating, but I truly don’t believe that even one messed up character with zero brain cells could entirely destroy such a complex and remarkably written series.

But folks, that’s not all. Not only did this trilogy have a page-turning plot line filled with shocking twists and turns and characters you’ll (mostly) fall in love with, it had integrated mental health and LGBTQ+ community representation as well. I know it sounds too good to be true, but I promise it isn’t. While I don’t personally suffer from anxiety related panic attacks, the way Maureen Johnson portrays these panic attacks through Stevie is eye-opening and not overly dramatic as many books seem to be, making a mockery of genuine internal trials people have to face. Maureen Johnson never made other characters blame Stevie for her anxiety, making sure she was recognized as a hero for dealing with these difficulties, not a victim eternally trapped under the boot of anxiety.

I will mention there are a handful of trigger warnings to be aware of while reading this series. There are mentions of and descriptions of anxiety and panic attacks, as well as instances of death (both of children and of loved ones), and somewhat gruesome details regarding death, murder, kidnapping, sexism, drugs, and underage alcohol consumption.

Overall, I greatly enjoyed Truly Devious, The Vanishing Stair, and The Hand on the Wall by Maureen Johnson. Maybe I’m just a cheesy, overly-invested true crime nerd, but I suggest all my fellow readers out there give it a try.

Also, big surprise: Maureen Johnson has announced she will be releasing a fourth book in her Truly Devious series (The Box in the Woods) on June 15. Though it is not related to the Ellingham case and is a stand-alone mystery, it is still part of this amazing series, and I am extremely excited to read it.

I have linked the Amazon pre-order page for the fourth book (The Box in the Woods) here. I have also linked the low price paperback box set that includes the first three books (Truly Devious, The Vanishing Stair, and The Hand on the Wall) I purchased off of Amazon here.