Uighur Muslims are being detained in Chinese concentration camps 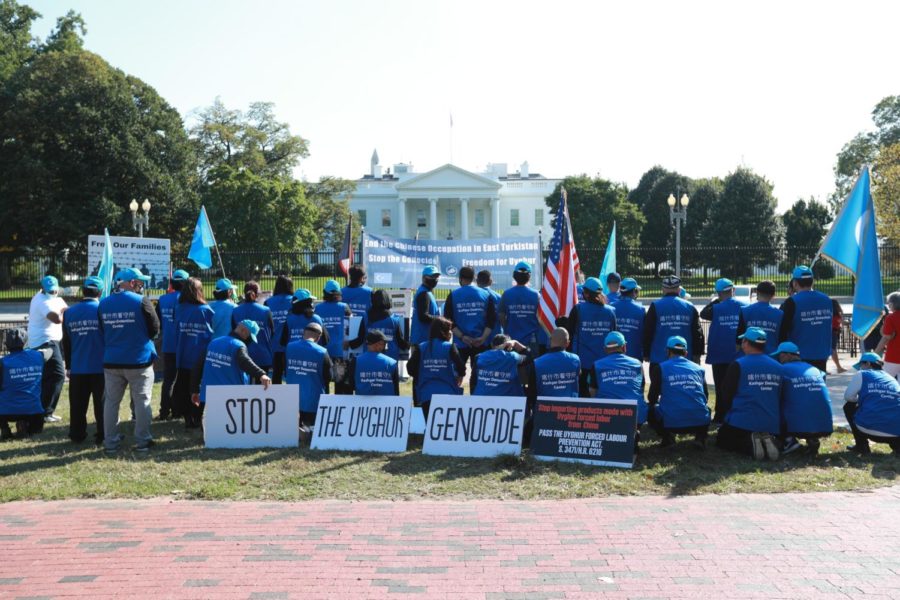 A picture taken by Kuzzat Altay depicts a group of people gathered on Pennsylvania Avenue in front of the White House in order to address and protest the Uighur genocide in China.

Trigger warning: This article contains information that may cause some readers to be upset, such as information on torture and abuse (physical, mental, and sexual abuse) of human lives.

We don’t often think of the act of genocide or mass extermination the kind of events that can still happen today; unfortunately, that is wrong.

Thankfully, many influential leaders are recognizing those major events and addressing them to assist in creating a better future for our country and for the globe.

Right now, there are torturous concentration camps currently in use in the country of China.

Inside Xinjiang, China, Uighurs are being suppressed in concentration camps. Uighurs are Muslim minority individuals living within China’s boarder. About 11 million Uighurs currently live in Xinjiang.

China took control of Xinjiang in 1949. Most Uighurs call it East Turkestan, its previous name before China took control. Xinjiang is one of China’s largest producers in natural gas due to its plentiful supply of rich oils and minerals.

In 2013 and 2014 Uighur militant extremists committed attacks in China. The Chinese government claims that these extremist views will threaten their security. In 2017 Xinjiang passed laws prohibiting the Uighur Muslims from some aspects of their religion, such as men growing long beards and women wearing veils. Uighurs not contained in the camps are still oppressed under government surveillance.

When the camps in Xinjiang were first suspected, the Chinese government would not admit that said camps existed. After buildings with watch towers and barbed wire fences were constructed, the Chinese government finally acknowledged these camps, calling them “re-education centers” for the Uighur Muslims. This building was further expanded since 2017.

According to PBS, “Members of the Muslim minority were detained, interrogated and beaten because of their religion.” This further highlights that the Uighurs are being imprisoned, not re-educated.

The only thing that could be considered re-education is that prisoners are forced to “undergo psychological indoctrination programs, such as studying communist propaganda and giving thanks to Chinese President, Xi Jinping”, according to Vox.

There have been Xinjiang concentration camp-related concerns surrounding Disney’s recently released live action Mulan remake. When the movie was shown in Chinese theaters, the credits thanked Xinjiang. It is unclear the context of this — what exactly were they being thanked for? Rumors have speculated that the movie was shot in Xinjiang. Even further rumors guess that the movie was filmed inside the camp itself. Disney has remained quiet on the matter, and there is no given evidence to prove these rumors correct. From photos of the interior of the concentration camp, the inside looks more modern, possibly too modern to be filmed in.

“For a time, Beijing inched toward greater liberty and respect for human rights. But in recent years, China has taken a sharp U-turn toward control and oppression of its own people,” said former U.S. Vice President Mike Pence in a testimony from December 4, 2018.

The worst abuses against human rights are occurring in Xinjiang. According to the open source reporting in the same testimony, “Since April 2017, Chinese authorities have detained at least 800,000 and possibly more than 2 million [as of 2018] Uighurs and members of other Muslim minorities in internment camps for indefinite periods of time… Reports suggest that most of those detained are not being charged with crimes, and their families’ lack information about their whereabouts, their well-being, and for how long they will be held.”

The police in China told the public that the Uighers are being detained because they were traveling abroad or because their family was abroad.

China is well known for censoring its media and press, therefore not much more information about these camps was provided from the government. Many of those that were imprisoned spoke out anyway.

I had the displeasure of reading testimonies from Uighur women that were held in the camp. There was much abuse and harassment placed upon these women by the Chinese police inside the concentration camps. According to an article containing the testimonies, the concentration camp’s “goal is to destroy everyone”. There were many primary accounts given of rape, abuse, and internal torture towards these imprisoned women. All of the former prisoners, both women and men, have been abused and tortured.

After receiving a July letter to the UN (United Nations), mainly European countries greatly disapproved of China’s leadership. 37 other countries defended China by pointing out the country’s past progress in human rights. Later the U.S. (along with 30 other countries) publicly condemned China for this “horrific campaign of repression”.

There are a couple ways that the average American can help this Muslim minority. According to two New York Times articles, The Wall Street Journal, Axios, and the same Vox article, Adidas, Calvin Klein, and H&M (as well as other companies) contain materials from forced Uighur labor. Consumers can try to look into what sources any goods that they buy and not continue to buy products that utilize forced labor in any form. Americans can also write letters expressing their concern with the oppression going on in China, whether addressed to the United States government, the UN, or another form of political administration.

There are additional creative ways that people can protest and assist in stopping this human rights abuse. The Vox article linked above states other ways to help support those who currently are and previously were imprisoned.

Even in our modern world, there are still human rights abuses throughout the globe. People are confused at how to assist in stopping it. Please consider doing your part to fight against these horrendous concentration camps.