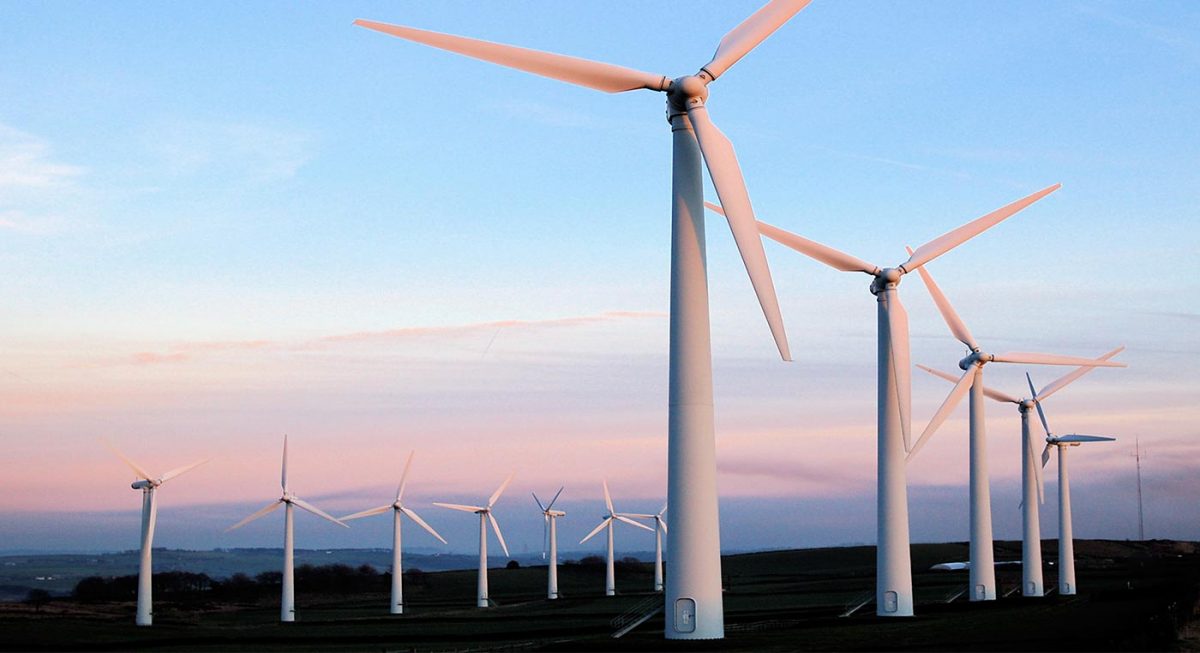 Depletion of Non-Renewable Resources: How Will We Hold Up?

Natural resources are disappearing, so are we preparing?

With the increasing population currently at 7,570,740,930, and increasing by 1.1% annually, non-renewable resources are at a concern. The more people that exist within the planet, the more resources that humanity will need to consume for energy and industrialization within developing countries. The depletion of the natural environment does not affect on a small-scale, it is ultimately worldwide, which is not good news. However, depletion is mostly evident within the countries that have the main reserves of a certain nonrenewable resource. “Coal reserves are available in almost every country worldwide, with recoverable reserves in around 70 countries. The biggest reserves are in the USA, Russia, China and India. There are an estimated 892 billion tonnes of proven coal reserves worldwide,” (World Coal Association+BP Energy Company, 2015). There is only enough coal to supply the world for only 110 more years. On the note of oil, it is mostly supplied by the Middle East, and,“…its reserve estimate [is limited to] to 1,687.9 billion barrels – just enough oil to last the world 53.3 years at the current production rates,” (International Business Times+BP Energy Company, 2014). Lastly, there is natural gas. “In 2014, U.S. total natural gas proved reserves…[reach] 389 trillion cubic feet (Tcf). The dry natural gas gas portion of these reserves…equaled 338 Tcf,” (United States Energy Administration, Jan. 2017). There are only approximately 160 years left of natural gas.

The depletion of nonrenewable resources is significant in the world today because the earth is incapable of supplying billions of people. “Earth’s total resources are only good for 2 billion people at the current demand…The way we’re living, we are already using 2 to 3 times more of the Earth’s natural resources than what is sustainable,” (The World Counts, March 2014). Without any resources left, the conditions of living will not only be decreased in developed countries since the countries are mainly dependent on the resources, but developing countries will also be set back since the countries require literally tons of resources to improve their current living conditions.

The main cause of the depletion of nonrenewable resources is explicitly human activity. The Industrial Revolution may be taken as an example. “The Industrial Revolution, which took place from the 18th to 19th centuries, was a period during which predominantly agrarian, rural societies in Europe and America became industrial and urban. Prior to the Industrial Revolution, which began in Britain in the late 1700s, manufacturing was often done in people’s homes, using hand tools or basic machines. Industrialization marked a shift to powered, special-purpose machinery, factories and mass production,” (History). With the new advancements that mankind produced during this period, nonrenewable resources played a major role, as it provided machinery the ability to do work without human effort. For decades, individuals were often inconsiderate of the fact that the resources, which was mainly coal at the time, are limited. It took a while to realize, therefore, humanity may be in for deep trouble.

Energy scientists, however, are taking deep consideration on implementing solutions in order to provide the world with energy for a longer period of time than the nonrenewable resources say so. There is one main solution across the board: the gradual conversion to renewable resources.

Solar energy is arguably the most important source of energy, as it can be stated that coal, oil, and natural gas derive from the photons of the sun millions of years ago. In terms of this day and age, solar energy is capable of being harnessed through photovoltaic cell panels, and by developing homes in a way in which they are given the maximum benefits by how and where they are built in alignment with the sun. As it may seem like the perfect solution to replace and preserve nonrenewable resources, there are drawbacks that prevent such an energy-utopia. “For example, if you have 25 panels installed, you may have an output of about 5 kilowatts (kW),” (Solar City, 2015). The reality is that the sun does not always shine; therefore, the energy from the sun cannot be harnessed all the time. Scientists are still in the process of developing batteries that can store solar energy, but all attempts have not been successful thus far. Another problem is that solar electricity is often expensive to install. To install solar panels on a home, it can rack up to be more than $10,000 according to EnergySage. 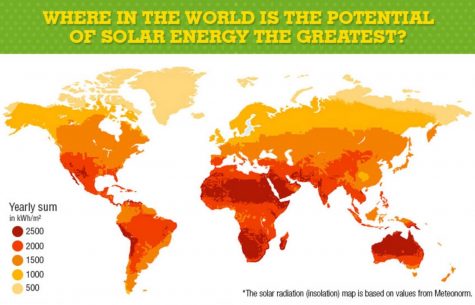 Hydroelectric energy is the power harnessed from moving water. The process involves stationing near a body of water, and plant turbines on the roaring waves that are then spun to produce electricity. Some systems even implement dams to capture water and release it so electricity can be produced at that given time. Again, it is another dreamy energy source that can easily replace and preserve nonrenewable energy sources, but the problem with the concept is that it does not typically produce enough electricity to support multiple homes. Hydroelectric plants may be 90% efficient in converting motion kinetic energy into electrical energy, but at minimal amounts as there are not many hydroelectric plants in the world. Most are concentrated in China. 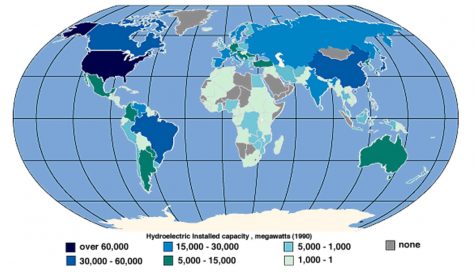 Wind energy is energy that is produced by movement of the wind. So far, the only way to harness the motion of the wind into energy are wind turbines. The wind turbines are spun by incoming winds within an area, which then are rotated to produce electricity just like the turbines used in hydroelectricity plants. “The output of a wind turbine depends on the turbine’s size and the wind’s speed through the rotor. An average onshore wind turbine with a capacity of 2.5–3 MW can produce more than 6 million kWh in a year,” (European Wind Energy Association, 2016). The problem is that an area can either be too windy, or not windy enough, so the production is not consistent enough to meet daily demands. Alongside with lack of production, the cost of a singular wind turbine is expensive, too. “The costs for a utility scale wind turbine range from about $1.3 million to $2.2 million per MW of nameplate capacity installed. Most of the commercial-scale turbines installed today are 2 MW in size and cost roughly $3-$4 million installed,” (Windustry).

Biomass and geothermal energy are relatively similar, as both require heat to an extent to produce electricity. “Biomass is organic material that comes from plants and animals, and it is a renewable source of energy. Biomass contains stored energy from the sun. Plants absorb the sun’s energy in a process called photosynthesis. When biomass is burned, the chemical energy in biomass is released as heat,” (U.S. Energy Information Administration, 2017).The heat is then turned into steam, which spins turbines at a high speed to produce electricity. The flaw is that it is not very consistent in production, nor is it highly efficient. Geothermal is essentially the same process, except that it harnesses the heat of the earth, and not plant waste.

As advancements are yet to be made within the field of energy science, nonrenewable resources are bound to be saved by the further uses and improved efficiencies of renewable sources. Meanwhile, a general solution that a common person can do is to use as minimal energy as possible within their life.

However, there is another idea that was presented by an Australian MIT professor to construct a giant liquid cell battery that is able to produce enough energy to provide for a large mass of homes.

“If in the time that it took [him to walk out to the stage of the TED Talk studio, some tens of megawatts of wind power stopped pouring into the grid, the difference would have to be made up from other generators immediately. But coal plants, nuclear plants can’t respond fast enough,” (Professor Sadoway on TED Talk, 2012). The liquid cell battery is said to be a form of energy storage that can easily replace solar, wind, and hydroelectricity, and it was created by Professor Sadoway at MIT. The concept involves constructing a large battery using mostly earth resources that are abundant rather than rare earth metals to not have to spend a fortune in manufacturing and factories. Aluminum has been consumed so much that it is as costly as silver, so constructing the batteries out of aluminum is out of the question. Magnesium would be used to produce the top layer of the battery, while antimony would be used to produce the bottom layer.

“[In the process of producing an electric force or current], magnesium loses two electrons to become magnesium ion, which then migrates across the electrolyte, accepts two electrons from the antimony, and then mixes with it to form an alloy.The electrons go to work [and provide people electricity]…to charge the battery, [it is connected to] a source of electricity, [much like a wind turbine farm]. And then [the electrical current is reversed]…this forces magnesium to de-alloy and return to the upper electrode, restoring the initial constitution of the battery. And the current passing between the electrodes generates enough heat to keep it at [the designated] temperature,” (Professor Sadoway on TED Talk, 2012). The battery is designed to solely be all liquid, including the electrodes, and molten salt would be used in the electrolytes.

On average, the battery is expected to surpass prototypes that are able to produce two million watt-hours. A liquid cell battery with a diameter of 36 inches is able to produce that amount of energy, with an abundance of the batteries, a large mass of energy will be created to power hundreds to thousands of homes. Plus, it would be incredibly cheap without environmentally harmful emissions. No moving parts, and almost completely controlled (as it still is kind of unpredictable like the shine of the sun).

Mead High is centered around the arising careers in the energy field since Colorado is reportedly progressing with replacing the use of non-renewable resources with renewable resources. The newspaper staff recently sat down with our principal, Ms. Ayers, at the “studio” (Portable 3) and she has high hopes for the future of students who are currently in the Energy Academy. Since the Academy has been present for only three years at our school so far, it is still in development. As a former student in the Principles of Energy Science class, there is definitely potential for innovative ideas to arise as the years go on.