Disney+ released new The Falcon and the Winter Soldier episodes weekly from Mar. 19 to Apr. 23, and I greatly anticipated each new episode released 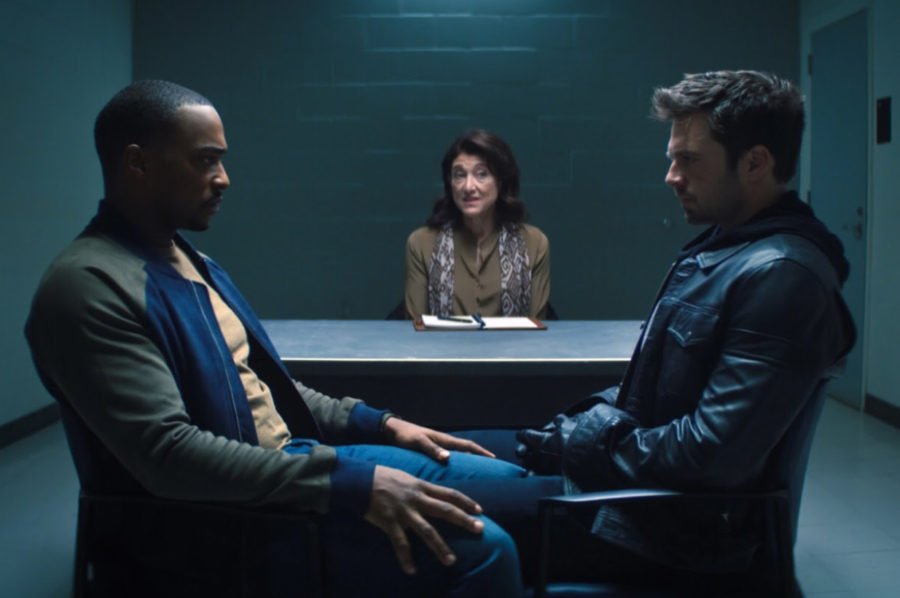 Pictured above is Sam and Bucky during a staring contest in the middle of a counseling session in Episode 2.

Disney recently released the last episode of The Falcon and the Winter Soldier, their second Marvel TV show, on Mar. 19. Following Marvel’s WandaVision, The Falcon and the Winter Soldier, directed by Kari Skogland, is set up differently. That being said, both shows are in the same universe that we know and love. The show was rated TV-14 and has six action-filled episodes.

In the show, Sam Wilson (Falcon), who was played by Anthony Mackie, teams up with James “Bucky” Barnes (the Winter Soldier), who was played by Sebastian Stan. Together, they try to take down the Flag-Smashers,  a group of extremists that want to use the super human serum against different governments. Along the way, Bucky and Sam are met by some challenges in their plans and some even more challenging people. This show touches on different cultures and how we all live different lives depending on the culture that surrounds us.

The TV series was given a budget of  $150 million, significantly more than most TV shows. (For reference, an average TV drama budget is about $3-$6 million per episode.) It was a little tricky to find viewership numbers for the show. SambaTV, however, “reports that 1.7 million households tuned into The Falcon and the Winter Soldier [opening] weekend for at least five minutes, besting the 1.6 million who tuned into WandaVision‘s opening weekend”, according to an article from Deadline. This is a pretty big deal for a TV show.

The rest of this review contains a few spoilers. Reader discretion is advised.

The performances in the plot were unbelievably good. There are definitely some well-acted, tense moments. This show has more of an action-packed feel to it — a lot less comedic moments than WandaVision. WandaVision humor fit better in the sitcom form. This humor is more of something that would normally be found funny from day to day. One of the funniest moments for me was when Sam and Bucky had a staring contest in the middle of counseling.

Sebastian Stan displays great sadness and suffering in his character. Bucky still struggles with trauma from his Winter Soldier days, constantly reminded of all the people he killed, all the debts he owes. After Cap dies, his nightmares second guess himself and his sanity. Stan demonstrates this extremely well. I almost felt like I was there with his character, watching the pain, and I cheered at the end when he finished the name book.

Anthony Mackie is able to portray the guilt that Sam feels when he gives away Cap’s shield. His character also has guilt for not being there to help his sister, Sarah. At the end of the season (released on Apr. 23), Mackie gives Sam’s speech in a very inspiring way. There’s not a lot to say about it. I felt chills — actual chills — go down my spine from that performance. It was absolutely amazing. The last episode was so action-packed that there seemed to be fighting every second and then a perfect moment of true peace from the speech.

I genuinely don’t have anything to say about the show that is negative! I enjoyed every last bit. The Falcon and the Winter Soldier was made very well.

I highly encourage any Marvel lovers to take a look.