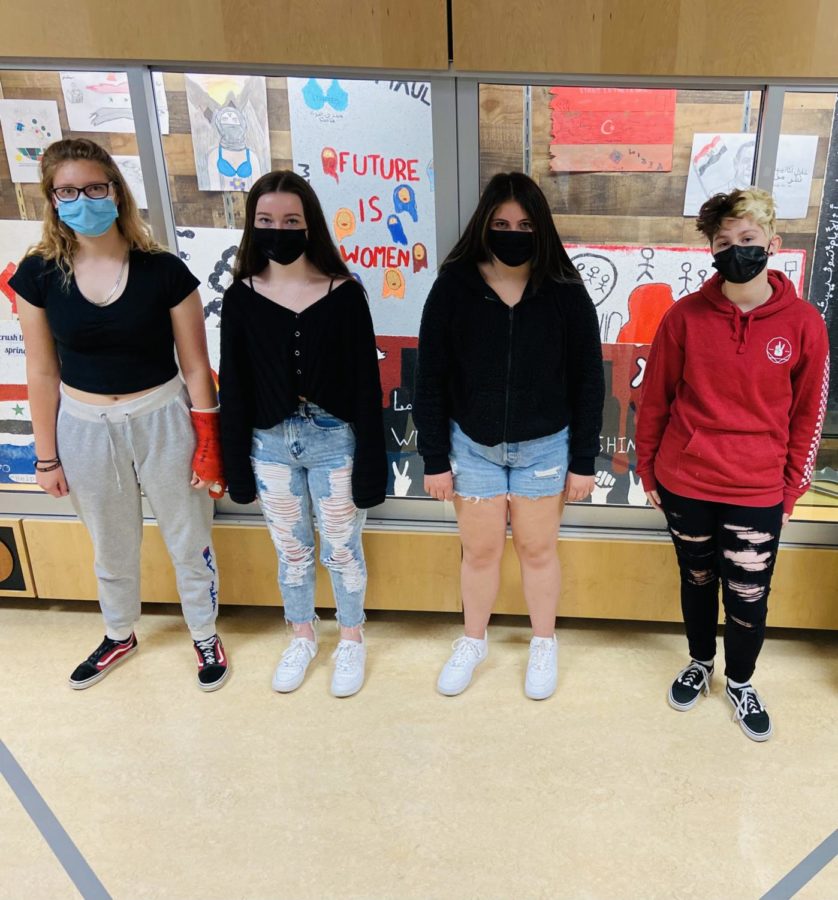 This is The Mav’s final editorial of the 2020-2021 school year. Editorials are articles written by a publication’s editors to express a shared opinion or discuss a topic the editors think needs more attention. These articles are meant to persuade readers and to promote critical thinking while sometimes encouraging people to take action.

On May 18, 2021, three Mead High School students reenacted the murder of George Floyd. One student wore blackface while two others kneeled on his neck. They then took a photo of the scene and posted it on a public Snapchat story.

George Floyd was a Black man killed by policeman Derek Chauvin almost exactly a year ago on May 25, 2020. His death sparked a summer of Black Lives Matter (BLM) protests, and he has become a symbol to both sides of the controversy: a tragic example of the effects of systemic racism in our country for those who fight this racism and a figure to be mocked for those in denial of it. We witnessed a case of the latter at our school.

We are disgusted that something like this was done at all, let alone by people that sit next to us in class. Whether their intention was to make some grand political statement or they were just messing around, the actions of the students in the photo were objectively wrong.

The immorality of their actions is not influenced by whether or not they were ignorant of their meaning. Their previous knowledge and intentions can’t change the fact that a literal parody of a murder — a murder traumatic to the African American community — flashed across the screens of youth and their families in our community.

What’s arguably most disturbing about this event is that it was likely done in ignorance. We want to think the best of our classmates, to think that they wouldn’t have done this if they’d fully understood the implications of their actions.

But that’s the problem: too many students at our school don’t understand the full extent of racism’s manifestations and why they are wrong.

Mead High School is not the most racially diverse place; while 28 percent of our peers are students of color, our school is mostly white. We, the editors writing this, have heard and seen a lot of problematic language and symbols at our school and in our local and nationwide community. A few examples of this are swastikas, Confederate flags, and use of the n-word.

We know that not every individual person in our school is directly participating in this blatant racism. Many of our classmates have united to rebuke the students in the photo, creating petitions and organizing protests to advocate for a quick, decisive response that reflects the severity of the act itself.

The contributions to inclusivity made by members of our school community are noticed and appreciated: Ms. HJ has a pride flag in her room, Ms. Berry makes sure that everyone in her classes knows it’s a safe place, and Mr. Linsenmeyer helps bring students to a special diversity conference every year in Cherry Creek.

But we cannot deny that Mead High School has a problem with racism, and we need to do something about it.

Public schools are responsible for the education of young people. This education includes math and English, but it also entails teaching us how to interact with our fellow human beings with respect and accountability. Many students live in privileged bubbles, and school might be one of the few places where they have the opportunity to experience diverse perspectives and address their internalized racism. When schools do not actively work to educate their students about modern issues of inequality, they squander this opportunity and become complicit in the racism we see in our country — from “harmless” jokes to the lynchings of Black men.

Making us read To Kill a Mockingbird isn’t enough to combat racism in our school. Truthfully, we don’t know what is enough. We aren’t experts on anti-racism education, but we do believe that the first step in fighting racism is acknowledging it.

Recently, according to the Longmont Leader, “A leadership team of 22 St. Vrain Valley School District teachers will work over the next few months to select texts that will ensure access to inclusive and diverse materials for students kindergarten through 12th grade.” The same source shared that this effort is being done in conjunction with the Colorado Department of Education and a group of St. Vrain students in the local chapter of Diversify Our Narrative.

We also recognize that the district is leading in some areas when it comes to more inclusive education.

The actions in the photograph have also been publicly condemned by leaders in the district.

Dr. Don Haddadd, our Superintendent, called the incident “disturbing” and “disgusting”. He released the following in an email: “Our district reaffirms its commitment to diversity and equality in our schools and in our operations.” He added that the district is committed to ensuring “the human rights, respect, and safety of each and every person”.

Principal Ayers said, “We’re taking this situation very seriously” and that this “behavior will not be tolerated” this morning over the announcements.

We appreciate what our administration and district leadership have done so far to address the photo, but what we need is a broader acceptance of responsibility for the prejudice present in our school community.

We cannot simultaneously put our scholarship winners and star athletes on pedestals of school pride while our principal states that “[racist] behavior does not represent our strong Maverick community”. This happened at our school. It does represent us. It doesn’t matter if only one student is engaging in offensive, stomach-turning acts of racism — one is one too many. We are all responsible when we do not expend our full efforts to end racism.

Anti-racism education must be a priority. The entirety of our student body has the ability to think for themselves. However, left indifferent, this ability can quickly corrode into a hive mentality where we don’t see an issue with actions like blackface and racist jokes.

Everyone has the ability to act responsibly and bring justice to an unjust situation. Whether you are a student, teacher, parent, or community member, it is up to you to do something about it.

Change is possible, but it becomes less and less probable with every person who waits around for someone else to say something first. Do not be a bystander — speak up when you witness or experience racism.

Through the combined efforts of administration and students alike, we can create an environment where we are constantly becoming better and purging ourselves of our prejudices. But as long as we tolerate racist behavior at our school, we all might as well be the students in the photo.