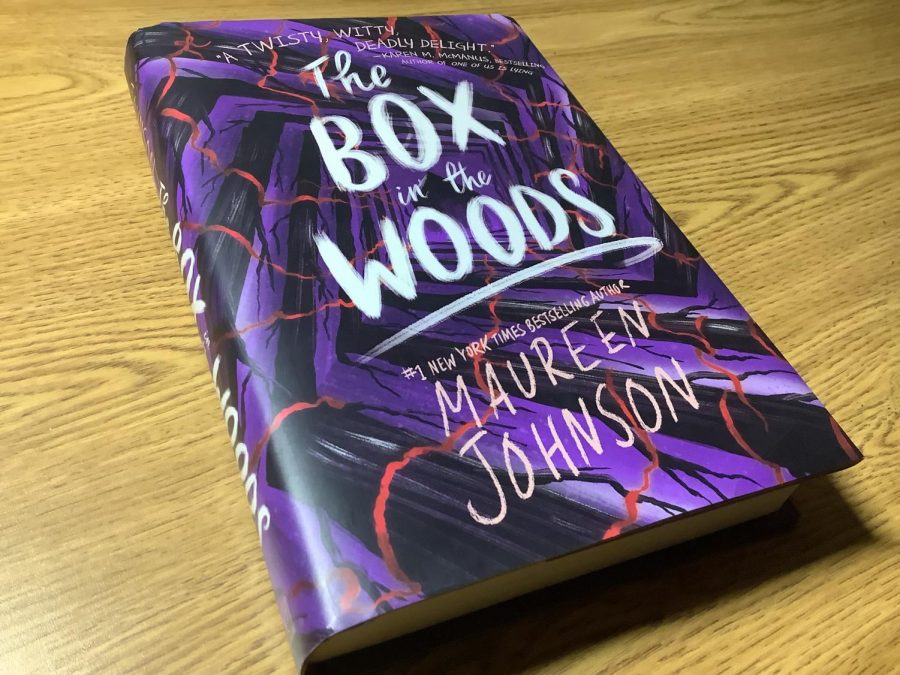 As said by the Booklist review, this mystery novel both “stands alone and adds compelling layers to the established characters” of Truly Devious.

Since my previously posted Truly Devious trilogy review, I have become even more invested in the world of true crime and suspense mystery media. I’m a major fan of Maureen Johnson’s work in Truly Devious, and when I heard about the release of a fourth novel — a stand-alone titled The Box in the Woods — there were multiple eagerly placed holds.

The first three books of the Truly Devious series are focused around the 1930s Ellingham case. By the end of the third book (The Hand on the Wall), this case is solved by amateur detective, Stephanie “Stevie” Bell.

I had questions, however, regarding how The Box in the Woods was structured. Was it a separate series solved within three new books? Did it include the Ellingham characters and location?

After reading the book, I confirmed that the novel is not at all related to the Ellingham case Stevie solves throughout the first three books, but it is still within the series. This offers the option to follow a brand new storyline without having to read the three additional books (if readers don’t mind very minor spoilers regarding the Ellingham character’s relationships).

“The Box in the Woods” case is solved within this fourth book, and the outline of another mystery is left open-ended in the possibility of another release.

The Box in the Woods follows Stevie Bell, Nate Fisher, Janelle Franklin, and David Eastman on an unnerving summer trip at Camp Sunny Pines, the location of the “Box in the Woods” murders. This case includes four teenage homicides that occurred in the 1970s (Diane McClure, Eric Wilde, Sabrina Abbott, and Todd Cooper), who were killed while illegally purchasing marijuana in the shadowed woods well after camp curfew.

Immediately, these murders are labeled as drug-motivated. The only major problem? The marijuana was left at the murder site. There are also clues leading to a serial killer often referred to in the news, but they don’t fully match up.

Decades later, Stevie Bell is asked by the current camp owner to attempt to get closer to solving the murders (and co-host a mystery podcast) while working at Sunny Pines throughout summer break. Nate, Janelle, and David join to assist in cracking the long forgotten case.

But things get messy when sensitive pieces of history are dug back up. Another murder occurs at the camp, making it clear that someone doesn’t want “The Box in the Woods” murders solved.

I enjoyed the plot line itself, especially when I took time to acknowledge the similarities between the Ellingham case and this newer case. The chapters alternate between the perspective of the original timeline and the modern case work, bringing past and present equally into focus and pointing out connections between both eras that would have been missed otherwise.

I noticed the progression of Maureen Johnson’s writing techniques improved between the first through third novels and this fourth novel. Though the first three books were well written, one of their main faults lay in the relatively limited depth within the writing style. The ability to better pronounce key storyline moments and enhance the reader’s personal investment were significantly clearer in The Box in the Woods.

Sadly, though a few crowd favorite characters weren’t involved (such as Larry, Hunter, and Germaine Batt), but David Eastman (my personal least favorite) was. Given my strong dislike for David’s manipulative characteristics, I was relieved to see the lack of his name in the synopsis. Unfortunately, he is still involved — later in the book and less intensely than in the first three, but involved nonetheless.

You can purchase your physical copy of the book here. Versions of Maureen Johnson’s commentary regarding the book can be found here and here, both of which could be an interesting addition to the reading of The Box in the Woods and the Truly Devious series!