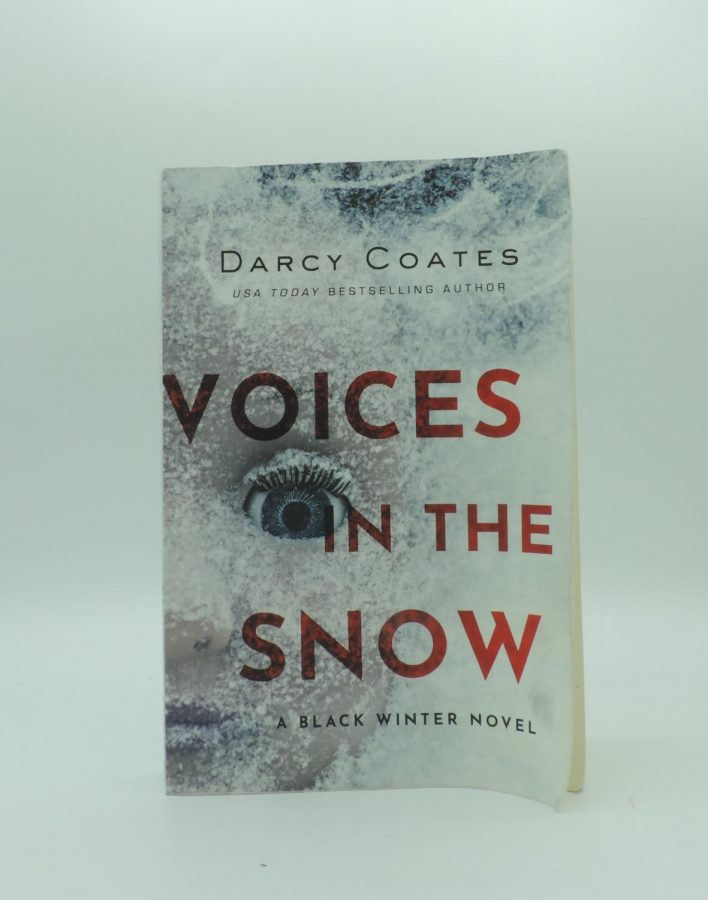 Voices in the Snow is a great read for anyone looking for a prodigious story that will leave a lasting impression.

Of all the books I own by Darcey Coats, Voices in the Snow has to be my new favorite. I read this thriller novel over my 2021 summer break and it immediately found its way to the top of my favorites list. Combined with thriller, love, and tearing emotions all in one, Coats will make you want to read the entire thing in one night.

The novel is set in the current modern age and introduces a normal girl, Clare, and a primitive man, Dorran, who come from very different backgrounds. There’s an unknown dark element of supernatural suspense and romance involved.

In this novel, the television news announces unexpected snow storms overwhelming the big cities. Clare’s sister, Beth, calls her, alarmed. Clare then plans to pick up her aunt Marnie and head to her sister’s bunker. On the way to her sister’s, she gets in a deadly car accident, prompting Dorran to find and take in Clare, saving her life. After spending a lot of time together isolated from the outside world due to the unbearable snow storms, the two manage their new life together and try to survive. They still don’t know the real dangers of the outside world — only the crippling cold, until they later find that the snow storm was not the only threat lurking outside. Both focus on surviving and attempting to contact the outside world after the early winter storm.

Dorran lost his whole family to this storm and took Clare under his wing, feeding her, bathing her, and giving her shelter. While together, Clare selfishly puts Dorran’s life at risk countless times. Clare takes advantage of Dorran’s naive and isolated life, that had been opened to a simple city girl.

I don’t believe Clare is the villain in any way — she never asked Dorran to take her in, and she didn’t owe him anything except basic friendly company.

Dorran nearly gives up on Clare, thinking of her as overly crazy and impulsive. But had Clare succeeded to leave him, he would be dead. Dorran, unaware of the new life outside and the diseases affecting people, could have been killed had Clare left.

Eventually, after the two continue to spend time together in isolation, Clare decides to stay for as long as needed and finally beginning to deeply trust and, later, love Dorran, who also finds himself having deep feelings for her.

The book ends with an unexpected cliffhanger hinting that the outside world will come with more challenges than the two originally expected.

I highly recommend this book to any readers looking for a thrilling read riddled with suspense and romance.