Released on Aug. 29, 2021, Donda’s three months of hype led to a release that was worth the wait 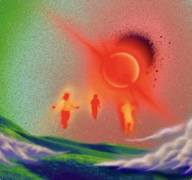 Though Kanye ultimately selected a different album cover for Donda, there were a couple different considerations for the cover art of the album, one of them depicted above.

Donda is Kanye West’s tenth studio album and had enormous hype surrounding it due to multiple release delays beginning in June 2020 and three massive listening parties before it’s public release.

Simply put, this album rollout has been the grandest, most iconic, and awe-inspiring moment in Kanye’s entire career.

On this album, Kanye proves once again that he is one of the most exceptional artists of all time. The album is dedicated to the late Donda West, Kanye’s mother, who passed away in 2007. The death of his mother flipped his world on its head and changed his life forever.

The introductory track is a tribute to Donda called, “Donda Chant”. The track consists of an odd voice chanting, “Donda” in a rhythmic pattern. The amount of times and the rhythm of the word “Donda” represents Donda’s last heartbeats before she passed away.

The second track, and the first true song, “Jail” is an anthemic narrative following a manic Kanye spiraling out of control as his public image and marriage fall apart. This song marks an old rekindled friendship by having Jay-Z as a great feature on this great intro.

“Off The Grid” is the fourth track and is in my top two favorite songs on the album. The song opens up with an insanely catchy hook from Kanye followed by an amazing hyper voice from the vocally impressive Playboi Carti. Fivio Foreign has an amazing verse after Carti, proving his place on Kanye’s album. Fivio’s verse showcases the upcoming rapper’s potential as he flows throughout a majority of the song. Then there is my favorite Kanye verse on the album. It’s explosive, fast, and an amazing showcase of why Kanye is one of the most critically acclaimed artists of all time.

Donda is an incredible and beautiful piece of art that perfectly captures what Kanye has been going through the last couple of years. The album is heartfelt and Kanye’s most sincere and personal album to date. This album will live on throughout musical history as a spectacle to be witnessed.