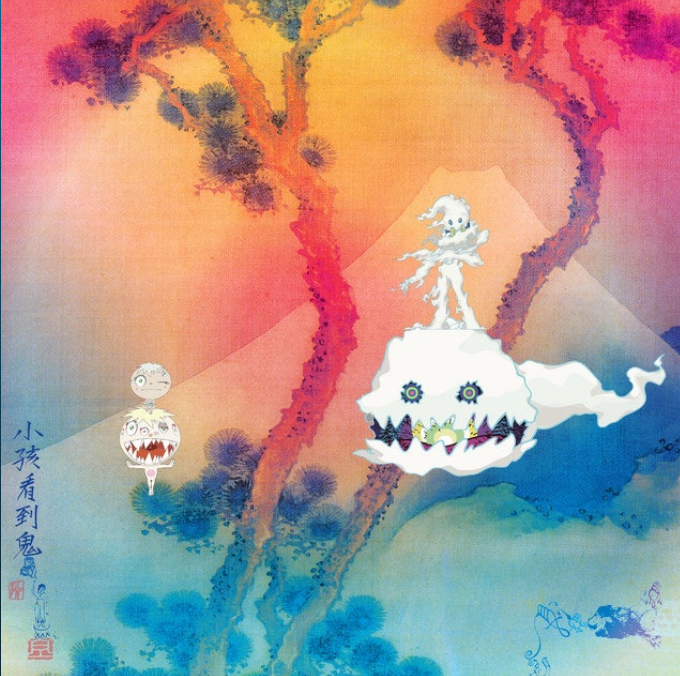 Kids See Ghosts (KSG) was released on June 8, 2018 and is a collaborative project composed by two of the biggest names in hip-hop and rap: Kanye West and Kid Cudi.

The two superstars have been working together since 2008 when Kanye released his fourth studio album, 808’s and Heartbreak. Kid Cudi wasn’t a big name in the music industry when the album was released, so Kanye took Cudi under his wing. Since then, they have produced numerous critically acclaimed songs such as “Father Stretch My Hands Pt.1”.

Kid Cudi and Kanye West were both at a rough point in their careers when Kids See Ghosts was released. Kid Cudi was fighting a drug addiction and depression, while Kanye was battling his own mental health issues like bipolar disorder and a severe opioid addiction.

“Feel The Love” is the introductory track and kicks the album off with a great start. The featured artist Pusha T is the main focus throughout the song, and he carries the flow. Kid Cudi is a background voice on the song, fitting in perfectly with Kanye’s over the top vocal performance at the climax of the track. Overall this is a great start — it includes a combination of amazing production and a nice feature.

“Fire” is next up on the track list. “Fire” is an aggressive musical approach by Cudi and Kanye as they talk about the failures in their lives and the people that judge them for it. They embrace the negative energy and people, using it to better themselves throughout the song. As the song develops they wish to be forgiven for past mishaps and mistakes, hoping to find redemption in a way.

“Reborn” is, in my opinion, the best Kid Cudi and Kanye collaboration of all time. The song is a beautifully produced and has some of the best singing and vocals from both artists. Cudi and Kanye discuss their overwhelming personal issues. Kanye discusses his mental health issues and wanting to be reborn as a better person. Cudi goes down the same venture but speaks about his drug addictions and rehab. It is an extraordinary song with beautiful themes and subject matter. “Reborn” is in my top three favorite pieces of all time.

This album features a few more amazing tracks, each one unique and amazing. Fans cannot get enough of this artistry, and it is still continuing to live on in music history.