Netflix film Red Notice reached the top ten watched, but is it really that good?

Red Notice was a recent Netflix original release, and despite with the all star cast, it falls short 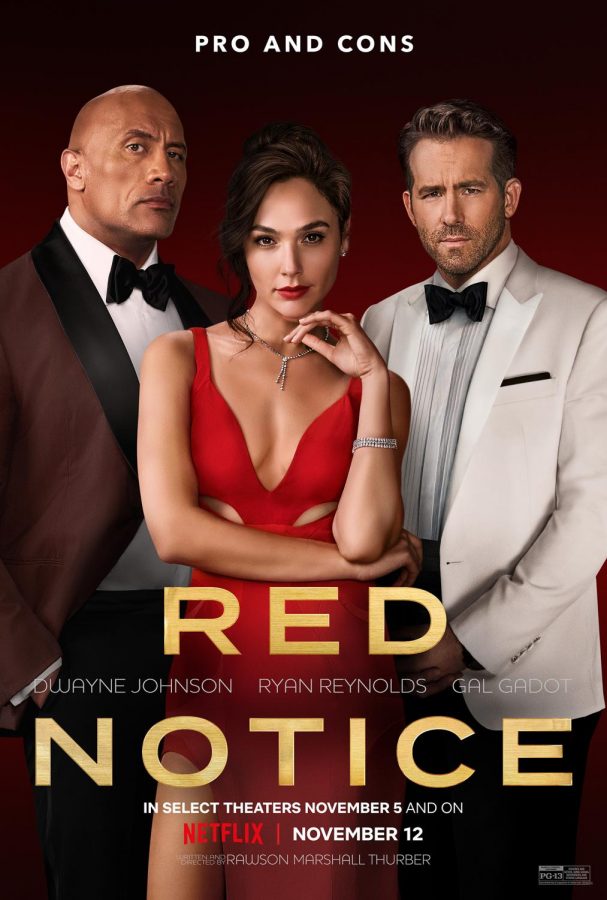 The all star cast of Red Notice built up a lot of a hype, but the film ultimately fell short.

Red Notice is a 2021 action comedy film written, directed, and produced by Rawson Marshall. The movie was released Nov. 5, 2021 and stars Ryan Reynolds, Dwayne Johnson, Ritu Arya, and Gal Gaddot. This Netflix original film totaled 118 minutes with a budget of $200 million and an estimated $2 million for box office.

In the film, Special Agent John Hartley (played by Dwayne Johnson), a criminal profiler for the FBI, is assigned to investigate the potential theft for one of Cleopatra’s eggs on display at the Museo Nazionale di Castel Sant’Angelo in Rome. The second egg is owned by a rich man named Sotto Voce, and the third egg has never been found.

After Hartley and his partner, Das (played by Ritu Arya) arrive at the museum and inform security about the potential theft, security dismisses their warning. However, international art thief Nolan Booth (played by Ryan Reynolds), escapes with the egg.

Booth arrives at his home in Bali with the egg and he is met by Hartley, who arrests him. Booth is then sent to a Russian prison and the egg is taken into custody.

Unbeknownst to Hartley, Booth’s rival, Sarah Black (aka The Bishop), swaps the real egg for another phony.  The next day Das accuses Hartley of being the egg thief. As a result of this, Hartley is put in a russian prison, which coincidentally is the same cell as Booth.

Shortly after Hartley arrives it is revealed that Booth knows the location of the third egg. After Hartley knows this information, they agree to team up. Booth gets the eggs and Hartley gets The Bishop in prison. Once they escape they get into a lot of adventures and attempt to find the 3rd egg.

To me, this movie was good, but it could’ve been better. The film was too focused on building suspense and adding hints to the upcoming plot twist. Because of this, the acting suffered at the end of the movie. The writers were too focused on making Booth funny, which took away from the other characters.

The action scenes were also underwhelming. They were unrealistic and looked as if they put it together at the last minute. In the fighting scenes, the characters would pause and converse in the middle of fighting. Though this was likely done for comedic effect, it just made the action scenes feel unrealistic.

When the plot twist happens, we see flashbacks to parts of the movie where they were alluding to the plot twist, which partially made sense if you’d paid attention. However, the plot twist itself was predictable and boring.

Overall, the acting, writing, and plot were disappointing considering the casting and budget of the film. I would give it a 5/10.