With a new focus on day-to-day work, Coach Reese leads new and returning players into an exciting season 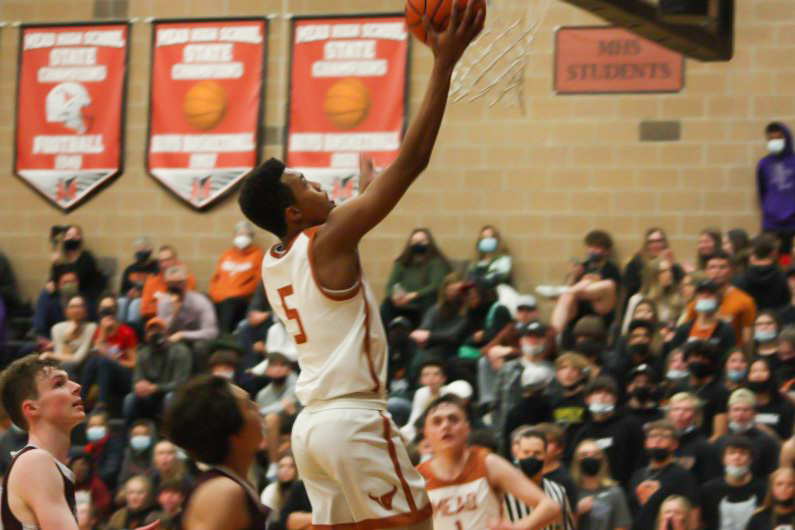 The Boys Basketball team is off to a rolling start once again this season and hopes to build on previous success. Mead won the 4A State Championship during the 2021 season, ending on a high note. Elijah Knudsen (‘22) had a monster run, scoring 30 points in the State Final and over 40 points in other games.

With many seniors on the roster, there is more pressure and higher expectations to excel once again.

Knudsen (‘22) shared that he is looking forward to this new season.

“It’s exciting to play with the same group we’ve been playing with for four years now. And it’s even more exciting that we were able to win last year and have a chance to do so again with almost the same team,” he said.

Players do their best to eliminate past expectations and focus on new goals for the season.

Coach Darin Reese said, “We’ve… gotten to a point where we were trying to get rid of all expectations and just focus on the daily work in order to get better.”

The boys are in a promising position in their league. They are off to a 10-3 start and are tied with their Holy Family rivals at 4-0 in 4A/5A Northern League play.

Coach Reese said, “Nathan Hoffman (‘22) is a real steady force for us defensively and offensively. Dominic Mclawrence (‘24) and Corby Tecu (‘22) all bring some great energy for us.”

The players look ahead to playoffs once more and are in an excellent position to make them again.

That being said, Knudsen (‘22) thinks that a lot of teams are looking at them as a target

Any team we play, we’ll have a target on our backs since we’re the defending [4A] State Championship team. The other teams will bring their max effort and almost every game will be a good game,” he said.

Boys Basketball’s next home game is against Erie on Friday, Jan. 21.