Elaine Benes is an unsung idol of 90s fashion

In recent years fashion has taken inspiration from the 90s, and Elaine Benes has some phenomenal looks from Seinfeld Seinfeld follows the everyday life of comedian Jerry Seinfeld and his friends, with Eliane Beans being the only female lead.

Throughout the last few years, fashion trends have taken heavy inspiration from the 20th century. Though we often see pieces from the 60s, 70s, and 80s in modern fashion, the 90s is my personal favorite era to draw inspiration from.

Blazers, velvet, flannel, baggy jeans, striped sweaters, and baby tees are some examples of clothing pieces that appear to be trending heavily right now, all stemming from 90s fashion.

Winona Rider, Avril Levin, Johnny Depp, and others defined the fashion of the 90s. Rachel Green from the 90s sitcom Friends has recently populated my social media pages with some of her looks. However, Elaine Benes from Seinfeld, another sitcom from the 90s, isn’t getting the attention she deserves.

In a recent rewatch of Seinfeld, I noticed Eliane’s outfits and I realized how little attention she gets. Eliane’s look changes throughout the show, as it was filmed from 1989 to 1998. She definitely sports some classic 80s hair early on, but later in the show she adopts a more chic style. 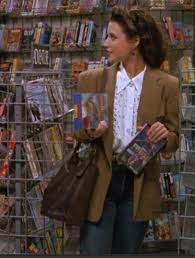 One of my favorite staples of Elaine’s looks are her blazers. In the outfit depicted above, the menswear silhouette of the blazer is juxtaposed with the more feminine lace top, all dressed down with the jeans and bag. This is something that I would absolutely wear today — it feels so put together and unique. 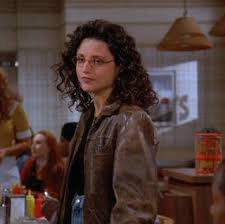 Throughout the show, viewers see Elaine in and out of work, whether it be publishing, personal assistance, or writing for J Peterman. A lot of Elaine’s outfits are more professional wear, but I’m especially fond of her more casual looks.

Her look with the leather jacket is an example of a later outfit of hers, and she even begins to sport round glasses. These glasses make me wish I had worse vision so I could justify wearing those frames. I also love this outfit because of its simplicity. The worn leather jacket, black shirt, and dark wash jeans are completely timeless. 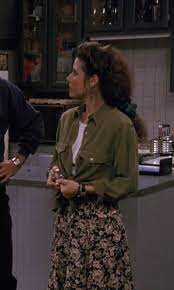 Eliane wears many floral midi skirts in the show, which are very on trend for spring 2022. This outfit is one I absolutely love — she does floral skirts so well. It’s not uncommon for midi skirts to look too conservative or too “grandma”, but Elaine always pulls it off. In this shot we do see some of Elaine’s hair from early on, but honestly, it works.

As a style lover, I love the clothing of 90s. And Elaine Benes has some of my favorite looks of the era.