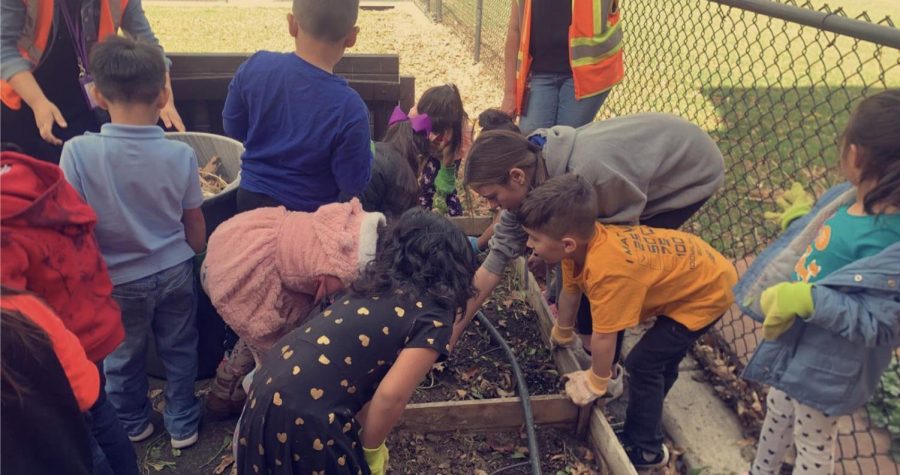 Elementary students at Columbine clean up garden beds as a part of the Farm to School program.

Those of us who take regular classes at the Career Elevation and Technology Center (CETC) have worked together to build a program called Farm to School that gives us the opportunity to lead. The program is student run, which means us students have put in many hours to get plans ready for the schools and work with the younger students.

It started off as an idea in January when our district wellness coordinator, Theresa Spires, came into the Advanced Agriculture-Greenhouse classroom and spoke to us about what we would be doing and how it could benefit our program. She explained to us that with this initiative to teach younger students, we would be given a grant to have animals back on our farm. This was a big deal for us because we hadn’t had animals since COVID-19, and getting them back on the farm brought some normalcy back to our daily routine with more hands-on work in the class.

In order for us to be able to teach, we had to take a food handler course through ServSafe. Spires came in and instructed us through the course and at the end, we took an exam to obtain the certificate that gave us the ability to teach younger kids.

With the knowledge we gained from the course, our class began to talk about how the lessons we needed to teach would be appealing to various grade levels. Because we were going to be teaching classes from preschool to middle school, we had to adapt each lesson to make the learning and activities better suited for each age. We split up into groups and thought of several different ways to teach a couple of general ideas, such as what plants need to grow, types of soil, and pollinators.

After we had all of the lessons, we made a schedule for who was going to which school and on what days. At the CETC, most of us have our own home high schools, so we were able to work around our classes to cover all the schools.

In February, we went to Longs Peak Middle School as our first school, and it was great; there was a smaller group of students in their garden club so we could gauge how our lessons worked and what else we needed to plan out.

We brought our soil lesson to the school, where we presented about the different layers of soil and what was important about each of them. After that we gave each student their own clear cup and we helped them put layers of several different colors of sand to demonstrate how each layer is different. As we did this, we reviewed with the kids about what each layer was known for and what we had talked about previously.

It was great to see the students get excited about something that we had put together for them and definitely made us hopeful to continue on with the other schools. We took this lesson to the rest of the middle schools in the program and had great results with them as well.

In March we visited the rest of the schools and presented a bracelet lesson. For the lesson, we handed out green pipe cleaners that acted as a stem as well as a bracelet for the kids. We talked about what the “stem” needed to grow, and we passed out colored beads that represented things such as brown for soil, blue for water and yellow for sun. For each bead we passed out, the kids placed them on the bracelet, and by the end, they each had their own model of a plant that they could wear. This lesson allowed for the younger students to connect new ideas to what they previously knew as well as broaden their understanding with a fun lesson.

In April, we started revisiting all of the schools. We brought six pack planting trays, a large tub of soil, and a variety of seeds that the students could choose from such as cucumber, tomato, pumpkin, squash, dill, and others. The kids were divided up into groups and we instructed them on how far down in the pocket to plant each seed and how to cover them up so that they would have the best chance to grow. This was a little bit more challenging for the smaller kids, but we managed and they seemed to enjoy getting their hands dirty. We transported these six packs back to the greenhouse at the CETC so we could take care of them for a couple weeks before we brought them back to the schools.

If we had enough time at the schools, we also presented a pollinator lesson. This introduced the kids to an idea about what else is involved with the process of plant growth. We had four main pollinators that we assigned to the students: bees, butterflies, moths, and hummingbirds. We brought laminated photos of flowers and plants that these pollinators were attracted to. The task for the students was to go stand by what they thought they pollinated and then we would discuss why they were attracted to each one. By the time we left the classroom, you could definitely hear them “buzzing” just like bees.

The final weeks of April and May were planned out so that we could visit the schools and help them clean out their garden beds. Then we could place what the kids had grown into the beds. (I can’t tell you how many of the kids thought it was funny to throw spiders in my direction, definitely not scared of those or anything…)

Putting what the students had worked on back at their schools was a really cool experience; we were getting to see the full circle of the program.

This Farm to School program was hands down one of the greatest opportunities that I was able to participate in. It provided me with a way to develop my own skills while also giving back to younger students in the district. I hope to be a part of the program next year and continue with it to see where it goes.