Moon Knight’s first episode was released on March 30, and since then, I’ve enjoyed the series 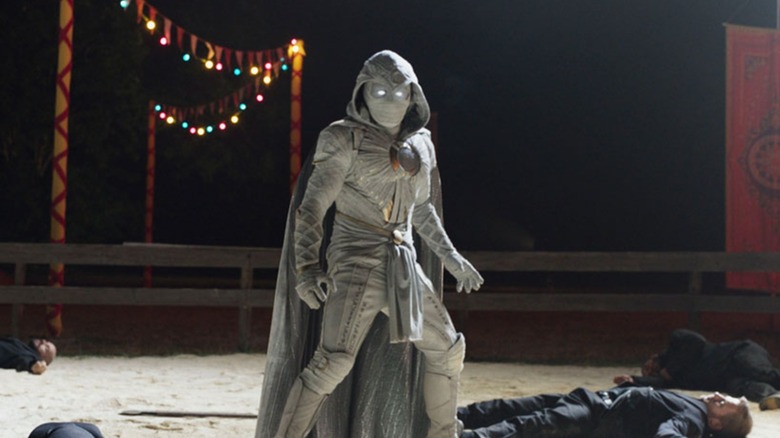 Moon Knight stars Oscar Isaac as the protagonist and Ethan Hawke as the main antagonist.

This TV show is absolutely ridiculous.

Moon Knight is the new Marvel show that has just recently aired its final episode. It has a total of six episodes, and they came out every Wednesday for six weeks starting on March 30. It stars Oscar Isaac who plays a British museum gift shop cashier named Steven Grant and Marc Spector as a mercenary.

One night while Steven is just messing around in his apartment, he wakes up in a field with a loud voice in his head, extremely confused.

He goes through a wild adventure getting chased by a man named Arthur Harrow (played by Ethan Hawke), who is trying to take down the Egyptian god Khonshu.  Arthur Harrow believes that Khonshu manipulated Steven into choosing the avatar he’s currently playing: Marc.

Khonshu is a bird-like Egyptian god. He is voiced by F. Murray Abraham who has an iconic voice and definitely left an imprint on the movie.

He then wakes up in his bed thinking it was all just a dream. He realizes he missed two days of his life during which that mysterious stuff happened.

The way Marc and Steven live is crazy. Marc is the dark, menace type while Steven is a nicer guy who doesn’t want to hurt anybody. Marc takes over the body when they are in danger and Steven has to try hard to take the body back.

At first I thought Steven had multiple personalities or something similar but it’s a bit different than I initially thought.

Marc has a wife named Layla who knows everything about the mysterious experience and is a very reliable character.

This show is crazy but overall a fun binge watch if you have six hours to spare.

I highly recommend this to any Marvel fan. It has interesting action and a very unique storyline that I believe every Marvel fan, or really just TV show lover, would enjoy.