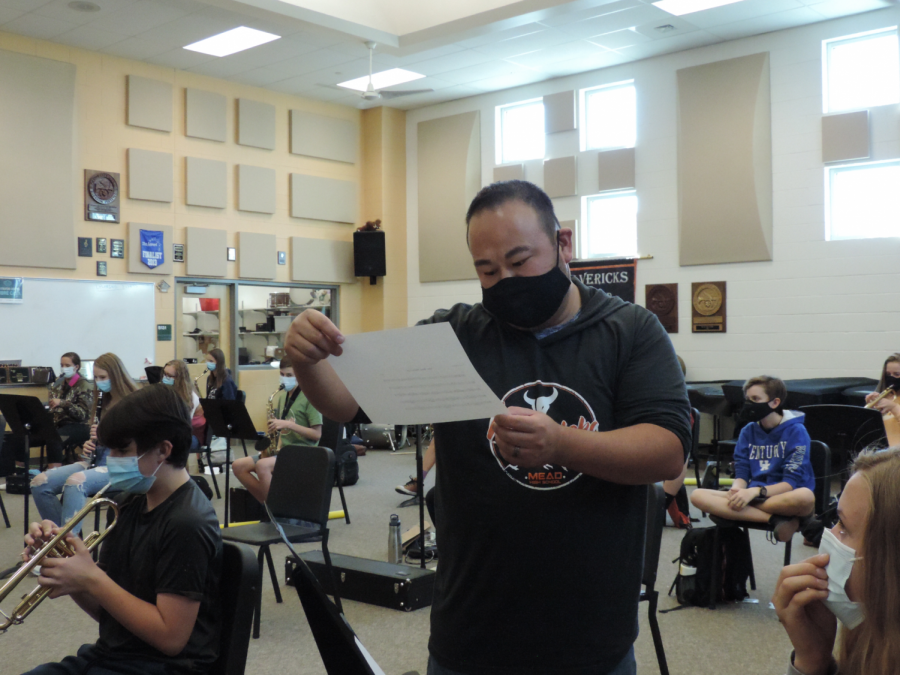 This was announced to current band students on June 16 and posted on Twitter the same day. He posted, “It [has] been an… honor to serve as your director.”

Mr. Lemons said he has greatly enjoyed being a part of the MHS band program, but always “knew [his] career would take [him] to an elementary music position”. He “had an incredible experience [student teaching] at the elementary level” during college.

Because Mr. Lemons will remain in the Mead feeder, he shared that he is thrilled to remain connected with the Mead community and send his students on to become future MHS musicians.

“Ultimately, my goal is to better balance being successful as a teacher, father, and husband,” he said.

Mr. Lemons has shared many special memories with band students and their families.

“He always made me excited to wake up and go to his class,” shared Brewster (‘23).

He remembers how Mr. Lemons would give him a hard time about “drinking Red Bull every morning in Jazz Band”. During a concert, Mr. Lemons surprised him with a peach Red Bull, making it a fun and memorable experience for both of them.

Andrew Deba (‘23) has also taken various music classes and shared that band always felt like a “strong community”. Deba (‘23) came into MHS from a middle school outside of Mead, and he said that Mr. Lemons made him feel welcome.

“[Band] was the thing that brought me into the school in a way that nothing else could,” he said. Mr. Lemons was the teacher Deba (‘23) knew he could lean on.

Filling the band director role in the program will be Ms. Abigail Koehler who has taught at Mead for three years as the assistant band director.

She will be taking over direction of the Unified Percussion Ensemble class as well directing the band department. She said “the transition was pretty natural” because she “know[s] the students and the program really well”.

“I learned so much from [Mr. Lemons],” she said. “I’m really excited to continue the work that he and I have been doing… and keep our vision moving forward.”

Ms. Koehler is looking forward to leading the “largest marching band we’ve had in… [four] years”.

Many Mead musicians and students appreciate everything Mr. Lemons has taught them and done for them throughout these past four years. We know Ms. Koehler will do an incredible job taking on her new position this upcoming school year.