Tragic Shooting Takes Place at a Walmart in Thornton 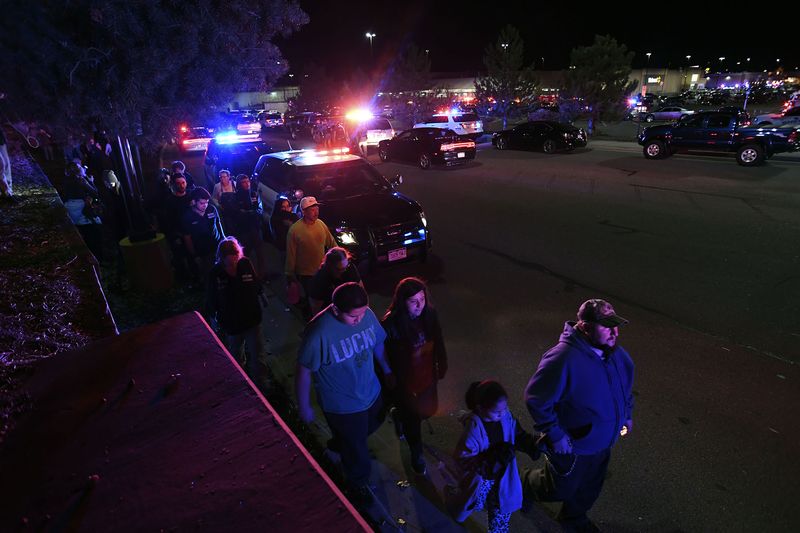 Employees and shoppers are released from a holding area in Walmart lot in Thornton on Nov. 1.

Police say they have apprehended the suspect responsible for opening fire at a Walmart in Thornton, CO, and killing three as of Thursday Morning.

47-year-old Scott Ostrem was allegedly armed with a handgun when he walked into the Walmart and began shooting at random.

The Thornton Police said Ostrem walked into the south doors at the Walmart located at 9900 Grant St. around 6:10 p.m. on Wednesday and “nonchalantly” began firing with a handgun. He then fled in a red Mitsubishi Mirage.

Shoppers inside the building at the time described the fear and terror they experienced.

“I just froze because I didn’t know what it was at first,” said Aaron Stephens, who was grocery shopping with a friend when the shooting began, to public radio station KUNC. “It was extreme terror. It was frightening. I was scared. I’ve never been that close to gunshots.”

First responders courageously rushed to the scene to evacuate citizens to safety and search for the suspect. Ostrem was not found at the scene and an hours-long manhunt ensued.

According to Fox 31 news, “a citizen tip led police to the apartment [where Ostrem could supposedly be found]. The SWAT team went into the apartment at 7121 Samuel Drive but Ostrem was not found. Just before 8 a.m., the 2017 red, four-door Mitsubishi Mirage associated with Ostrem drove past the apartment complex. Law enforcement quickly took off and followed the vehicle, stopping it at West 72nd Avenue and Federal Boulevard where Ostrem was apprehended without incident.”

At a Fox 31 news conference, police said Ostrem did not have an extensive criminal history before the shooting.

Two men, 68-year-old Carlos Moreno, a structural traders worker for the Auraria Higher Education Campus, and 26-year-old Victor Vasquez, a father of two with a third on the way, were pronounced dead on the scene and a woman, 52-year-old Pamela Marques, was rushed to North Suburban Medical Center where she later died.

“This is a very heinous act,” police spokesman Victor Avila said to The Telegraph. “We don’t know exactly what the motive of the person was, but it was certainly a terrible act.”

Ostrem is expected to appear in court on Friday at 11 a.m. at the Adams County courthouse.

Mead High School Students at home watched the event unfold before their eyes.

“I was shocked and in complete disbelief,” said sophomore Trevin Haines about the how he felt watching the story of the shooting unfold as the night went on.

Sophomore Caden Campbell added, “I feel bad that more people have to go through tough times as a result of the shooting.”

Friends of Victor Vasquez have started a GoFundMe to help his fiance, mother, and children with funeral costs and any immediate needs. As of 4:50 p.m., $9,079 of the $25,000 goal had been raised. If you wish to donate please visit https://www.gofundme.com/victor-vasquez.