This tiny, cheesy snack has become a go-to for the raging stomachs of teenagers throughout the day; why are they addictive? 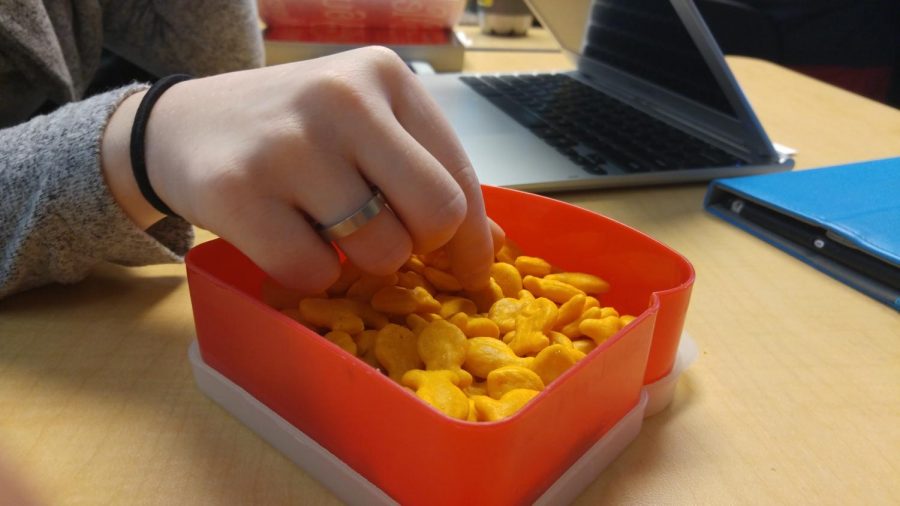 Student reaching into a tray full of Goldfish.

Have you ever found yourself binging on an entire gallon box of Goldfish at two in the morning while watching George Lopez reruns on TV? Yeah, probably not, but it is bound to happen to many because of the widespread addiction epidemic.

Introduced to the United States in 1962 from Switzerland, Goldfish has been the largest selling product from Pepperidge Farms (under Campbell’s Soup Company) for several years and has been relevant to the lives of millions of consumers.

With over 142 billion Goldfish being produced at Pepperidge Farms annually, each individual cracker being 2.5 calories (making the recommended portion 55 crackers for about 140 calories), millions of people across the United States consume them at a considerable amount.

With over 142 billion Goldfish being produced at Pepperidge Farms annually, millions of people across the United States consume them at a considerable rate. Each individual cracker is 2.5 calories, making the recommended portion 55 crackers, or about 140 calories.

According to U.S. Census data and the Simmons National Consumer Survey, 33.2 million people last year have consumed 1-3 6.6 ounce bags of the addictive snack in an average month.

6.28 million Americans consumed 4-7 bags and 2.67 million consumed eight bags or more in the same period of time of 30 days. Taking these numbers, it means that approximately 0.8% of the United States population eats around 40 pounds (or more) of Goldfish a year!

So what is driving people to eat such large portions of these magical cheese fish? Is it crack? The answer is no, but it is the sodium content!

A single portion of Goldfish, which is 55, has around 230 milligrams of sodium in the overall mix. Scientists and researchers have explored the reasoning behind salt cravings, which can be attributed to saltine crackers because of their obvious “sodius” properties.

From Florey University, neuroscientist Dr. Craig Smith states that the consumption of salt and salty snacks fire the natural opioid system within the central amygdala, where positive and negative emotions are handled and have the potential to get us hooked on seeking salt for taste.

“It wasn’t until now known that our natural opioids working in this emotional hotspot drove salt cravings,” he concluded in a neurochemical research paper titled “Salt Appetite, and the Influence of Opioids” in 2016 along with neuroscientist Dr. Andrew J. Lawrence.

An individual should have no more than one teaspoon of sodium within one day, so eating large portions of Goldfish is not the best decision to make since an increase of sodium intake can lead to several health problems.

A good deal of students in the Mead High community take a personal liking to taking Goldfish as a snack, so be sure that if you are to be offered the snack that you have a swig of water handy to keep the sodium level relatively lower in your system.