The combination of French pop music, two great actresses, and a script with many twists and turns; creates an exciting movie that most audiences will be entertained by. 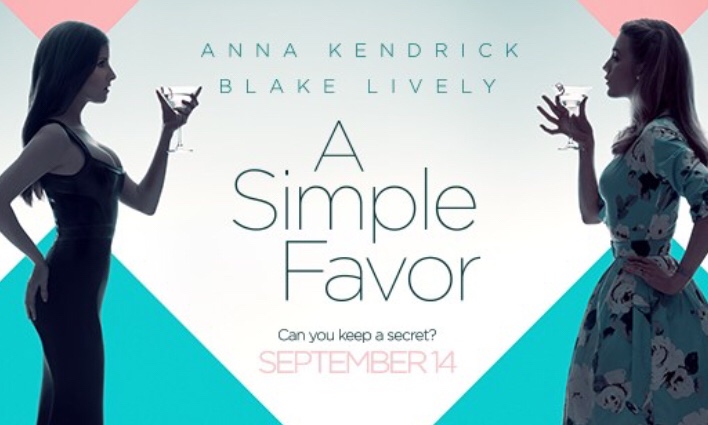 From the 1960’s french pop music to the Nancy Drew style investigations, Blake Lively and Anna Kendrick bring the perfect mixture of comedy and suspense to “A Simple Favor.” Emily (Blake Lively) and Stephanie (Anna Kendrick) are first brought together when their boys want a play-date, and the moms form a bond over martinis and secrets. Things escalate quickly when Emily asks Stephanie for a simple favor; then goes missing.

Kendrick plays Stephanie, an artsy mom who would never give up a chance to help out with crafts at school. She runs a vlog where she cooks for other stay at home moms, and gives them life advice. Her life is turned upside down when she meets Emily. She is the “dream mom” who has all the money she could ever want and the perfect husband; or so it seems. Emily’s appearance hides the fact that her life is not as great as she makes it out to be, and Stephanie finds that out soon after she goes missing.

“A Simple Favor” runs at a perfect pace, not seeming too fast or too slow. Paul Feig, who also directed “Ghostbusters” (2016), “Spy” (2015), and “Bridesmaids” (2011); did an excellent job with the casting, film style, and soundtrack. Kendrick and Lively had great performances, despite this genre of movie not being what they typically audition for. Kendrick’s change from an “Acca Bella” to a crime investigator was unexpected, but it was loved and appreciated in the end. Lively’s experience in past thriller movies boosted her performance and overall character adaptation for this film.

Feig’s  development of these characters on to the big screen was intense. In an interview, Kendrick said, “It’s a really layered movie and my character, not only is she layered in terms of her path and her history and her personality, but just the tone of the film is so fluid.” Actors asked so many questions on set to make sure the character they played met every single one of Feig’s expectations, so in the end the final product would be perfect. In the same interview, Lively said, “We were always trying to find that balance between grounding the film in emotionality and turning these characters up to an 11,” and Feig pushing these actors to their limits really payed off, because the end result was amazing.

“A Simple Favor” has an R rating for a few reasons. There is two sex scenes, foul language, and cruel/rude humor throughout the movie.