Friday's victory is the fourth straight blowout win for Mead, and fifth blowout of the season 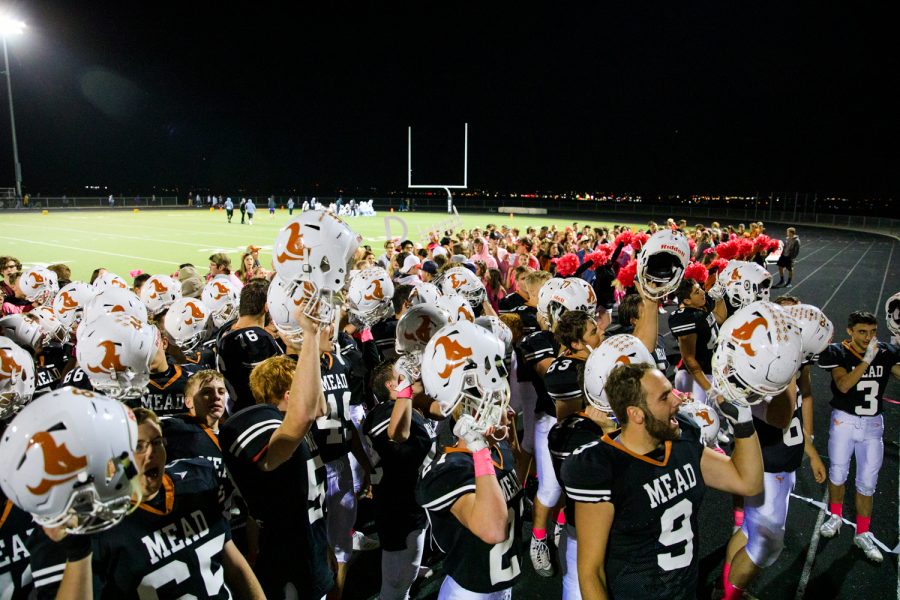 Varsity Football beat the Denver North Vikings 49-6 Friday night. This marks the fourth straight win for the Mavericks—all of which have been blowouts—and the fifth blowout of the season.

The Mavericks were favored to win the game, with Mead winning their previous three games by margins of 30 points or more, including last week’s 56-7 win against Holy Family.

This game was the final home game of the season and, as per tradition, the seniors of the football team, cheer team, and band were recognized.

“It’s time to kinda reflect on your year,” said senior Jay Olson (#90), “[and] just have a great game with the guys you’ve made it all four years with.”

Mead started the game strong with three interceptions and 35 points by the end of the first quarter. The Mavs started the second quarter with possession of the ball and immediately got a touchdown, resulting in a running clock with more than 11 minutes of play time left in the first half. Denver North High School would score only once during that remaining time; their only score for the game.

“We came out and we went hard from the beginning to the end,” said senior KJ Jacobs (#9).

At the start of the second half the Junior-Varsity team went in in place of the Varsity team to allow Varsity to relax. The JV boys scored Mead’s seventh touchdown with roughly three minutes remaining in the third quarter and would go on to hold their own against Denver North’s Varsity team for the rest of the night.

Mead will be facing off against Frederick next Friday, November 2nd, at Frederick High School at 7:00 pm.