“The Rest of Us Just Live Here” is a hilarious but touching story of the kids on the sideline of a typical teen fantasy. 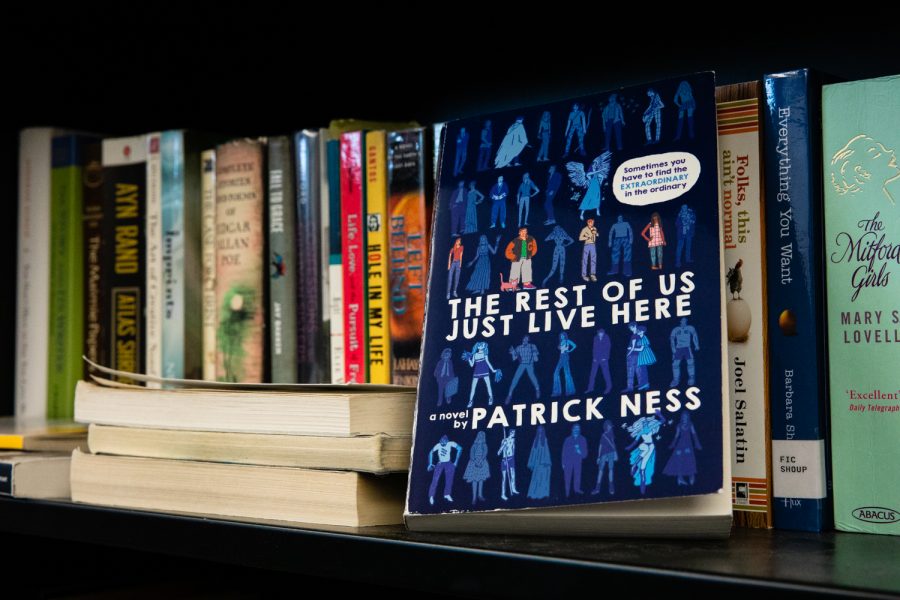 “The indie kids, huh? You’ve got them at your school, too. That group with the cool-geek haircuts and the thrift shop clothes and names from the fifties. Nice enough, never mean, but always the ones who end up being the Chosen One when the vampires come calling or when the alien queen needs the Source of All Light or something. They’re too cool to ever, ever do anything like go to prom or listen to music other than jazz while reading poetry. They’ve always got some story going on that they’re heroes of. The rest of us just have to live here, hovering around the edges, left out of it all for the most part.

In The Rest of Us Just Live Here by Patrick Ness, our main character and narrator, Michael “Mikey” Mitchell, lives in a small town where weird things happen to the indie kids. Mikey isn’t an indie kid, so he lives a pretty normal life with limited interference from vampires, soul-eating monsters, alien queens, etc. He spends most of his time with sister Mel, best friend Jared, and crush Henna.

Mikey has A LOT of relatable issues. His dad is an alcoholic, his mom is a politician, Mel once died for a few minutes from an anorexia-induced heart attack, and he has OCD/anxiety.

So yeah, Mikey’s life kind of sucks, though not much more than a normal person, which is sad when you think about it too much. His dad isn’t the violent and abusive kind of alcoholic, but he isn’t really present in his children’s lives. Mikey’s mom’s political career distracts her from their needs, and the stress of appearing to be the perfect American family to the press incited Mel’s anorexia and Mikey’s OCD. Mikey sometimes gets stuck in “loops” where he does a random act like touching corners or washing his hands over and over until he does it right. But he doesn’t really know what “right” is and believes something horrible will happen if “right” doesn’t happen. He knows how unreasonable this is, but mental illness can’t be reasoned away.

The story starts in the last stretch of Mikey’s senior year. All he wants to do make it to graduation, hopefully before the high school inevitably blows up from the indie kids’ shenanigans, and get away from his little town. However, an attractive (especially to Henna) former indie kid named Nathan moves in, and Mikey is a little too suspicious of Nathan and too curious about the aforementioned shenanigans for his own good. During pretty much the whole book, Mikey is one misstep away from ruining his friendships and colliding headfirst with the indie kid stuff.

My favorite thing about The Rest of Us Just Live Here is the “chapter structure”, for lack of a better term. Each chapter begins with a summary of the indie kid stuff that happens at the same time as Mikey’s story. For example: “Chapter the Second, in which indie kid Satchel writes a poem, and her mom and dad give her loving space to just feel what she needs to; then an indie kid called Dylan arrives at her house, terrified, to say a mysterious glowing girl has informed him of the death of indie kid Finn; Satchel and Dylan comfort each other, platonically.” And then continues the normal story. It’s the funniest thing ever and so much better than deep quotes or whatever other thing YA authors stick at the beginning of chapters to feel special. The whole book is basically making fun of fantasy YA trends. Fantasy YA books are my life and soul, but Ness sure is excellent at mocking them.

My one problem with this book is the romance. I can’t really tell if the author is trying to put in a romantic subplot or not. Sure, Mikey has a crush on Henna, and they do have a bit of action, but Henna is just so weird and variable that the entire romance thing is weird and variable, too. Her character feels more like a plot tool to give Mikey some more drama than a human being. And I guess this is a bit of a spoiler, but I wasn’t satisfied with their relationship at the end of the book. It was all so weird.

But in general, this book is fantastic. It was a nice passive read. Like, I loved it and couldn’t put it down, but it didn’t bring me to complete emotional ruin. It seems like a generic book at first sight, but its humor and insight bring it above its YA fellows. Read The Rest of Us Just Live Here to find the extraordinary in the ordinary.