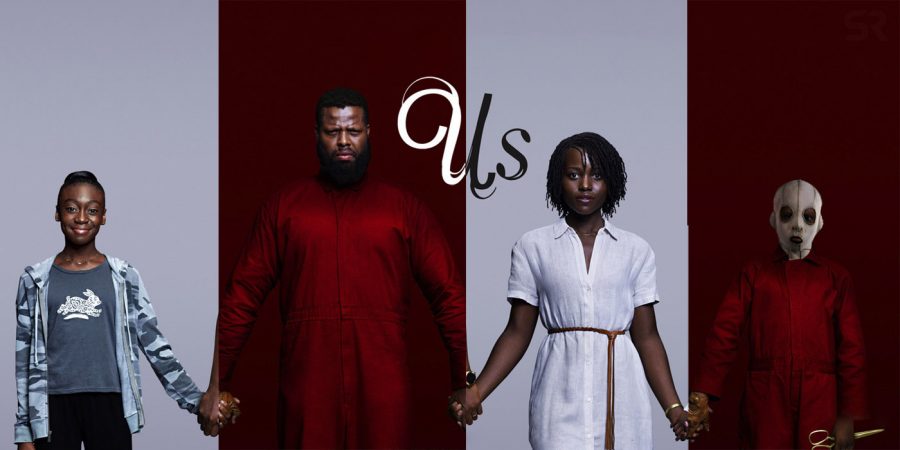 Adelaide Wilson (played by Lupita Nyong’o) goes on a family vacation to Santa Cruz, where strange coincidences create odd hints back to her childhood. She starts to sense something dark and sinister is on its way and tries to rush her family back home. Just on their way out, a strange family arrives on their doorstep with their only motive being to kill Adelaide and her family.

Lupita Nyong’o was by far the most entertaining part of this movie. Her acting was the best I’ve ever seen in a movie, and that’s saying a lot because I’ve seen SO many movies. The way she was able to portray both the “tethered” and normal version of Adelaide was impressive. Not to dull down the other performances, because the rest of the family was spectacular as well, but Nyong’o’s was noteworthy as special and one of a kind. I’m sure I won’t see that kind of determination towards a role for a while. After seeing her performance, Jordan Peele couldn’t have picked a more perfect person for the role than Nyong’o herself.

The story had amazing build up, a perfect climax, and a very satisfying ending. I found myself talking to others and making connections even days after first seeing it. One review, in particular, said, “You haven’t seen Us until you’ve seen it twice,” and I completely agree. The first viewing is always great, taking in all the horror and scares for the first time. But on the second go, you can take time to notice all the small details Peele included and all the secrets hidden throughout the movie.

(To take a closer look at some fan theories, click this link)

I previously wrote about Peele’s Get Out and how a horror movie would have to work insanely hard to be better. I wouldn’t put Us past Get Out; I would rank them the same. Each has a different aspect I loved and will never get tired of seeing, but one is not better than the other to me. Peele has worked incredibly hard to get where he is today and in the two amazing movies he’s made; his hard work definitely paid off. Us is sitting at $182 million in the worldwide box office, making it Peele’s second film to pass $100 million. Which is crazy because he has only directed two movies that have both crushed the box office.

There weren’t as many jump scares as I’d hoped for, but that was made up for with the gore and disgusting sounds when the “tethered” were killed. Jordan Peele created such an entertaining story that was full of humor, horror, and suspense. The plot twist changed the way I viewed the entire movie and prompted me to see it multiple times to fully get an understanding of everything.

Jordan Peele is new to the “directing” side of things, but he’s been in the movie industry for a while now. And his introduction as a director has been a success, as both films have been a hit in the box office and with the fans as well. His future’s looking good, too, as he’s hosting the remake of The Twilight Zone, and I can only imagine what movie he’s thinking of making next.