The first cross country meet of the season is hosted at Mead, and there’s a lot that goes into it 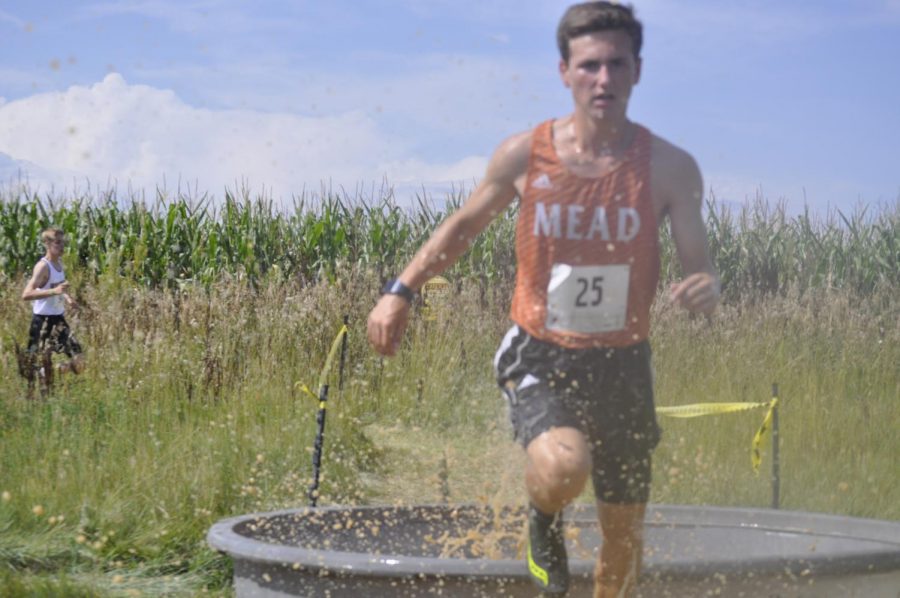 It was a sunny 85-degree day that had everyone sweating under the hot sun. Although it was hot, that didn’t stop the cross country kids from preparing for the first race of the season.

“I’m excited but nervous; I want to do well for the first race of the season,” explained junior Sarah Maslowski.

All of the teams — including Mead — felt the pressure but were ready to start the season.

Mead students and coaches were excited to host this meet at home and couldn’t wait for the runners to go through the water obstacle set up by coaches.

“The water obstacle was the part we were most excited about,” said Assistant Coach Steve Parsons.

Creating the course is the most time-consuming element. “Figuring out where the course will be and measure it is the hardest part,” explained Assistant Coach Alex Garcia.

Not only did the coaches have to map out and measure the course, but they also had to make the surface of the course by mowing and laying down flags. They also had to invite teams, get the money for the meet, get volunteers to help run the meet and concessions, and invite school teams to the meet.

Not only was there a lot of preparation on the coaches’ end, but the cross country athletes did a lot to get ready as well.

“Each day of the week that we have practice is a different type of exercise,” said Maslowski. “We start the week off with speed then long runs and run up hills, stuff like that.”

The first week of practices is often considered the hardest, not only as a result of running and establishing endurance but because athletes are in the hot sun.

“It can be hard for the kids to keep going the first week with the heat,” said Garcia. “We try to remind them that it will get better, and it’s worth it.”

“Although I was nervous before the race, the team is so supportive that even though it’s intense, it’s all worth it,” said participant Tyler Bare, junior.

After the race, everyone was exhausted. There were some injuries that had runners sitting down after the race.

Mead’s teammates were very proud of each other.

“We run for the team, and I’m so proud of everyone and the hard work we’ve done,” said Bare.

“When we see people cheering, it keeps us going,” said Maslowski.

Bare shares the same feelings. “When I cross the finish line, I feel so accomplished,” he said.

Being in cross country isn’t easy, and neither is the preparation, but as many people say, it hurts so good.