Even with slight deviations from previous assemblies, this years assembly did not fail to excite 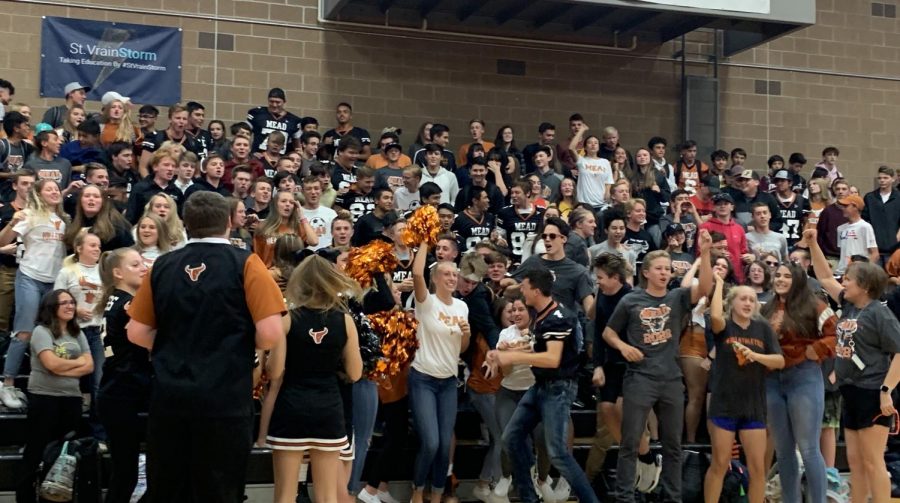 The Homecoming assembly ended the week with a bang.

The 2019 Homecoming season came early this year, arriving in only the second week of September. Nevertheless, it was just as festive and exciting as it has been in previous years.

This year, Mead adopted a 1940’s style with a “No Place Like Homecoming” theme to pay tribute to The Wizard of Oz. With a fun spirit week featuring days such as “Lions and Tigers and Bears, Oh My!” Monday and “Which Witch is Which” Wednesday, there was no doubt that today’s assembly would be anything less than spectacular.

The Mav’s very own Creative Editor Tyler Gibbs and Technical Editor Abi MacPhail were selected to MC the assembly.

“I think it’s an exciting opportunity,” said Gibbs. “But there’s no pressure. I have speaking experience, and Abi and I do this every week.”

MacPhail was just as calm and collected. “I’m not nervous because I have no dignity,” she remarked. “If I mess up, it’s not like it’s a big deal.”

Editor-in-Chief of The Mav Kassidy Trembath remarked from the sidelines, “MavTV is making a name for itself, and it makes me happy.”

It was no surprise that the MavTV hosts brought some of the MavTV humor to the floor with them. Opening with the infamous “Welcome back to MavTV: Assembly Edition, where we answer the important questions like…” line, they were able to begin with some of that charm that is familiar to so many students (while giving them a good laugh in the process).

Following the introduction, the band, led by Drum Majors Caden Campbell (‘20) and Molly Caylor (‘20), executed a wonderful performance of the MHS Fight Song and “Over the Rainbow,” continuing to play into the Wizard of Oz theme for Homecoming.

Following the band’s performance (and some more jokes from our MavTV representatives), the cheerleading squad took the floor to dazzle the audience with a Wizard of Oz themed routine.

Zoe Brown (‘20) took center stage as Dorothy, performing a half-up in the middle of a “tornado” and coming to face the senior and junior sections. The whole cheer team performed excessively well, with some of the girls flying through the air and even doing flips. Towards the end of the performance, the squad engaged the crowd and coaxed them into chanting “There’s no place like Mead!” over and over again.

They’ve been practicing the routine since the summer, and today was finally the day to perform.

“It went [well],” Brown said after the assembly. “All the stunts went up pretty good. There was some stumbling, but we did really well!”

Then, following the cheer routine, our MC’s called attention to our foreign exchange students, saying, “Not only have they come to a new school, but a new country, too, which is probably pretty scary,” and calling for a round of applause for their commitment.

The transition away from the foreign exchange students to the MHS dance team was seamless and well-executed by MacPhail and Gibbs engaging in playful banter about wanting to learn how to dance if they ever moved to a different country for a year.

The dance team performed to a mix of bad and two-step, and they were well synchronized.

“We’d known about this routine since the summer, but we put it to that song and added some pieces yesterday,” said dancer Abigail Davis.

After the dance team’s performance, Mr. Chad Eisentrager thanked the school “for not booing [him]” as he took the floor for the summary of the school year so far and to remind everyone to be safe.

“Homecoming week has been fantastic and so has the school year,” he said. “Attendance is up; academics are up; school spirit is through the roof!” He detailed how well our sports are doing this year and how successful our students are in their respective fields.

He was especially proud to announce that there are “over two hundred students with perfect attendance up til now”.

To celebrate these students, he called up a representative from each grade with perfect attendance to compete to be the Perfect Attendance Champion via games of rock-paper-scissors. Overall, the title of champion went to the freshman representative Zach Barrett.

As Mr. Eisentrager left the floor, the spotlight was once more turned on the MC’s.

Gibbs got everyone’s (well, maybe only the juniors’ and seniors’) hopes up by announcing, “Now the moment you’ve definitely ALL been waiting for…we’re bringing back breakfast break!”

Sadly, this was not actually the case.

Instead, MacPhail and Gibbs announced the Homecoming royalty nominees and winners.

The winners for each grade will be crowned at the Homecoming football game tonight at 7:00 PM.

The announcements of Homecoming royalty concluded the assembly, and the day ended with a collective chant of the popular cheer “Do it!” and the school’s fight song before students were released.

Principal Rachael Ayers said, “[The assembly] went very well, and I love the Maverick spirit. Everyone was involved, and it was just great.”

Ariel Harper (‘23) echoed the same sentiments. “It was great… I wish we could’ve gotten to hear the assembly better [in the freshman section], but it was still amazing.”

The assembly itself was fun and energetic, but students noticed that the royalty was not asked to participate in games as done in previous years.

Haines commented, in conjunction with other members of senior and junior royalty, “We were very disappointed that we didn’t get to do any games this year. We were looking forward to it.”

Student council member Kayla Parmley said that there were no games in order to make sure that the assembly would allow enough time to crown the royalty. “Some of the winners can’t make it to the [football] game tonight, so we wanted to crown them now so they still feel involved,” she said.

The Homecoming dance tomorrow night from 8:00 PM to 11:00 PM will conclude Homecoming Week. In case you haven’t gotten the memo, the theme is Wizard of Oz, There’s No Place Like Homecoming. The Mav urges you to be safe and make good choices tomorrow night and, above all, have fun!