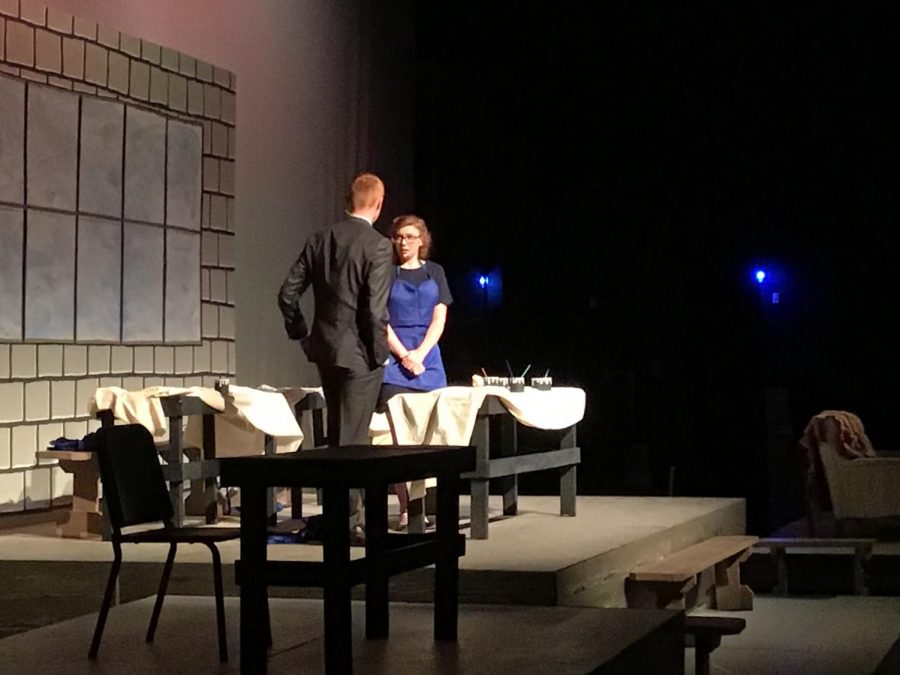 Ana Manica (‘21) and Braden McCawley (‘20) star as Grace Fryer and Arthur Roeder in the fall production of Radium Girls.

Radium Girls by D.W. Gregory explores “the strange case” of the radium poisoning that affected women in the 1920s. Detailing the problems they face in their fight for justice and recognition, the play was performed with a careful delicacy and attention to detail on its opening night.

The Drama Department has worked relentlessly on the play since the beginning of October in order to perfect and fine-tune the scenes. Participating in after school rehearsals, some lasting until 8:00 PM, and weekend rehearsals, the cast and crew devoted hours upon hours into their piece.

Malia Harton (‘21) who plays Kathryn Schaub, one of the girls affected by radium poisoning, said, “There was a lot of hard work put in from the cast and crew.”

Student Producer Abby Davis (‘20) said earlier in the week leading up to the show, “Everyone has put in a lot of time and effort into making this the best play that we’ve done.”

The show carried on with fault, inciting intrigue and sometimes laughter from the audience.

Though the show itself was dark and, in some ways, depressing, the cast members did subtle actions to alleviate some of the tension.

Sabrina Borg (‘23), who plays the “eminent French scientist” Marie Curie, read her newspaper upside down in one scene. She later said, “We needed some comic relief in this depressing show; that’s why I read newspapers upside down.”

Audience members were walked through a ten year period of the Radium Girls’ fight for justice by reporter Jack Youngwood, played by Sydney Studholme (‘22), and sob sister Nancy Jane Harlan, played by Faith Hale (‘20), who narrated the major events in newspaper-like scenes. Without giving away spoilers, one could say that it was thrilling to see what happened in a seemingly short amount of time.

Radium Girls is a “fast-moving, highly theatrical ensemble piece” that “offers a wry, unflinching look at the peculiarly American obsessions with health, wealth, and the commercialization of science,” according to its summary. Filled with heart, passion, and righteous anger, it tells a tale of human struggle and compassion. Though the play is “written with warmth and humor,” the overall mood is dark. After all, girls are dying! But, in the words of our dear Madame Curie in the play, “What’s one more dead dial painter?”

“I would describe Radium Girls as a story of female empowerment in the golden age of the patriarchal society,” said Ana Manica (‘21) who plays the main character, Grace Fryer. “It’s not over-exaggerated and it displays the grey areas of such a setting. It truly emphasizes the beauty and integrity of human life.”

“You learn about history throughout the play because it’s all based off of true stuff,” said Davis.

The cast did some digging into their characters and did indeed find that the show is based on real-life events. To help advertise for the show, they put up some informational tidbits around the school.

In addition to researching the events that made up the play, the cast and crew also had to figure out how to portray certain aspects of the time such as bleeding from the mouth and glowing in the dark.

Harton remarked that “There was a lot of trial and error [in the scene work], especially with some of the gory scenes.”

It took the cast and crew several tries to get the fake-bleeding scenes correct. Some notable trials included downing “shots” of fake blood to cough up later and taking a powder capsule and mixing it with the actors’ saliva.

“It tasted awful—like a crappy raspberry chalk,” said Trevin Haines (‘20) who assisted in trying out these different methods.

The glow-in-the-dark effect was not nearly as difficult and took some good ol’ glow make-up to accomplish.

“Almost everything [prop-wise] was made by hand,” added Addy Barnaby (‘20). Barnaby along with Rathan Dujardin (‘22) crafted the props used in the show through techniques such as tea staining paper and painting wooden rounds. Because it’s near impossible to find authentic “Radithor” bottles and other trinkets from the time, the prop committee had to spend extra time reconstructing the items for the actors to use as props.

Stage Manager Isaiah Sandoval remarked, “As stressful as [putting on the play] is, it’s always a rewarding process and the people here are great.”

“I enjoy all of the memories that I make with all my friends in the class,” said Braden McCawley (‘20) who plays the U.S. Radium Corporation company president Arthur Roeder.

Emmalyn Howard (‘22) who played Mrs. Fryer, Grace’s mother, enjoyed her time working with the cast and crew. “It’s been really fun and [Drama] doesn’t feel like a class. It’s more like, ‘Wow, I’m so glad I got in here.’ Everyone really cares how this turns out and they’re good people.”

In addition to opening night, the show will take place tomorrow, November 14, and Friday, November 15, at 6:30 PM in the school’s auditorium. Tickets are $5 for students and seniors and $8 for adults. The MHS Drama Department hopes to see you there!