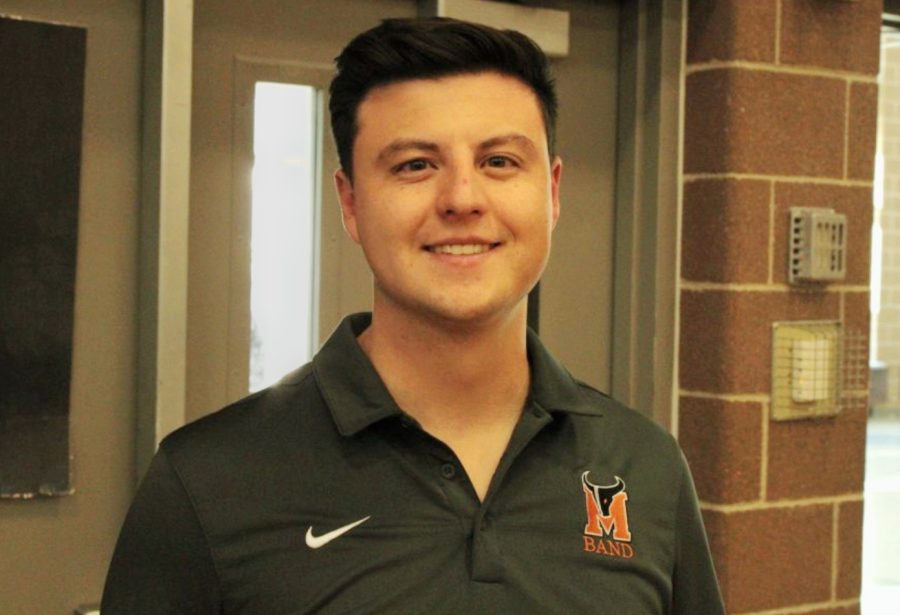 “[Students] can come to myself or Ms. Koehler for help if they need [it], they always have someone to rely on here,” said Borja.

Mr. Borja is Mead’s newest band teacher and the mastermind behind the Jazz & Dine show earlier this semester. Borja has a Bachelor’s degree in Music Education and a Master’s in Conducting, both from Colorado University in Boulder.

Before coming to MHS, Borja worked at Murphy Middle School, a little ways south of Dallas, Texas. This will be his fourth year teaching.

Borja grew up in Texas and was in a marching band himself when he was in school. He shares that his high school was very competitive and practiced rigorously.

“I was in band every day and we were very, very competitive to the point where we would have rehearsals… right after school every day,” he said. He added, “Most Saturdays we would go compete at marching band competitions. And before that, we would also spend two weeks in the summer, before school started, [doing] three band rehearsals [a day].”

About the Mead culture Borja said, “I’m really impressed by how everybody seems to know the words to the fight song, there’s such a strong sense of school spirit here.” It is no secret that students loved having previous band director Mr. Lemons, but Borja shared he has felt very welcomed by students, and they appear to be enjoying him as an instructor.

Borja said the biggest change from his job in Texas and his new role at Mead was the shift from a middle school. He added, “You can approach things a lot differently with high schoolers than you can middle schoolers, there’s already that pre-established knowledge they have [to] work off of.”

His favorite part of teaching, he said, is the students. Borja said he likes making his classroom a positive environment so students “always look forward to being there”. He hopes the band program keeps growing, and he emphasized that he wants students to grow in their musical ability and also learn skills they can use beyond the classroom. Borja said he hopes to have a classroom where students can “have the most positive experience but also grow in terms of their musicianship and their existence”.

Mr. Borja’s least favorite part of his job is the early start time. “It’s rough,” he added. Despite this, it’s definitely worth it to Borja.

Although he is new to MHS and the school district, his wife has been working for SVVSD. “I feel like I’ve already gotten a lot of what [St. Vrain] is [as a district] hearing from her experience teaching here.”

His biggest advice to students is to pay attention, although this is something students are used to hearing and he added, “Not in the way most teachers say ‘pay attention’, but rather paying attention in a way where you can really hear what a teacher is saying and notice something… that applies to what you’re doing.”

Borja said students should always “find ways to make connections” in and out of class.