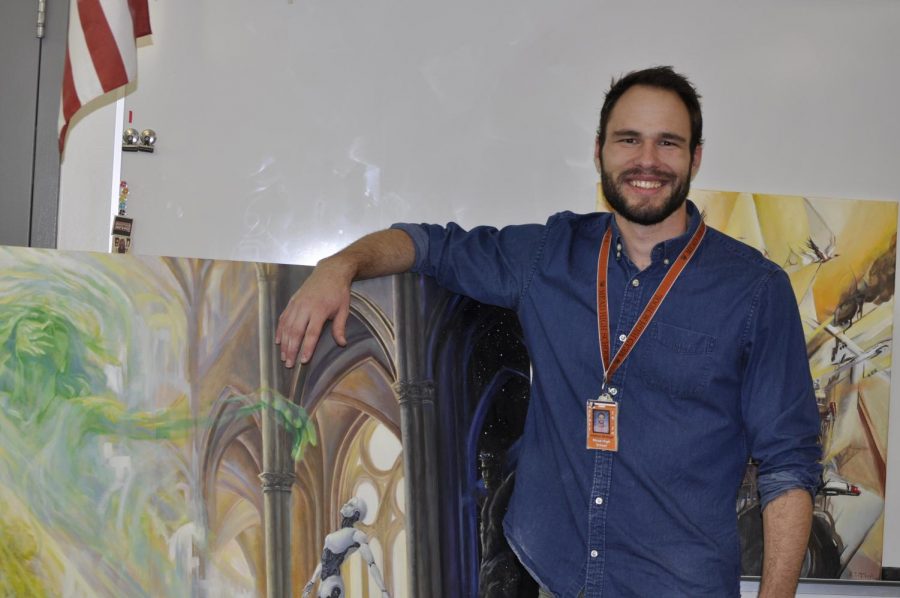 McHugh standing next to his biggest painting.

A look into his art-filled life, and teaching.

Mr. Jonathan McHugh is an art teacher at MHS. He teaches beginning ceramics, beginning painting, and advanced ceramics. When he started teaching beginning sculpture, so many people had signed up to take the course that he ran out of class space to teach it. Mr. McHugh became interested in art at a very young age, which inspired him to become the teacher he is at Mead today.

“I was too tiny to even remember [when I became interested in art]. My dad was an art teacher. He’s retired now, but [he] was always painting something”.

Mr. McHugh is from Fort Collins. He has two brothers, one of which is an identical twin. His older brother is a teacher as well, teaching Spanish to students in Montana.

When he was younger, he was always drawing with his brothers and using his dad’s art tools from school.

Mr. McHugh loves being creative with his art, but also likes backpacking, and fly fishing.

Surprisingly, Mr. McHugh has only been teaching for three years. When asked if he likes teaching at Mead so far, Mr. McHugh said, “I do. There’s a lot that’s hard about it, but it’s also really worthwhile. What I love is seeing people get more excited and interested in art, and surprised in what they are capable of.”

At home, Mr. McHugh has one cat named Reina, but he doesn’t know what breed she is. Reina is her Spanish name, which ironically means “queen” in English. He said the name fits her because she is the queen of the house. Reina is apparently a bit “chunky” and acts like a dog.

One of his favorite memories throughout his life was with his family, back when he was in high school. “I remember being on this camping trip when I was supposed to be in [high school], and we took a few days off [during] the fall, and the leaves were changing. [So] my family—[my mom and dad, and my brothers and I]—drove up to the Frying Pan River (by Aspen and Glenwood) and we camped up there for a few days.”

They went fly fishing while the fish were rising, and there was nobody else out. He said it started to rain, so the fish were going crazy. Mr. McHugh said it was a lot of fun and one of his all-time favorite memories.

His students hope that Mr. McHugh stays at MHS for a long time and continues to create amazing art and form bonds with his students.